Scientists controlling the Rosetta spacecraft have taken drastic action and moved it into an orbit 125km above the comet 67P/Churyumov-Gerasimenko after dust clouds caused a complete reset of its navigation instruments.

“It immediately forced us to change our trajectory, our orbital plan,” Andrea Accomazzo, the Flight Director of the Rosetta Mission at the European Space Agency (ESA) told Al Jazeera.

The mission had been expecting a gradual increase in the amount of dust and gas coming from the comet as it warmed up on its journey towards the sun at a speed of 18km per second.

The sudden eruption overwhelmed a camera which tracks the stars and allows the craft to navigate.

“This unit is basically fooled by the dust particles that are flying around the comet. It thinks these are stars, so it doesn’t know which altitude Rosetta is orientated,” said Accomazzo.

The next three months are critical for the $1.8bn scientific mission because during this time the comet will reach its closest point to the sun and is likely to be the most active.

The clutch of scientific instruments onboard Rosetta will still be able to measure and photograph the comet from its new orbit, but not in as much detail.

The mission aims to unlock knowledge about the origins of the Solar System and even life on Earth, which some believe may have started with comets “seeding” the planet with life-giving carbon molecules and water.

The mission team says it is unlikely Rosetta will now spot the Philae landing craft which it dropped onto the surface of the comet last November.

“Already at 20 or 30km it was very difficult to identify Philae, so at 125km it is impossible to take an image and see it,” said Accomazzo.

The Philae lander bounce twice before becoming lodged on its side near a cliff on the comet. Many of the craft’s 10 instruments were able to run their tests and transmit the results before its battery ran out.

There had been hopes as the comet neared the Sun that Philae’s solar panels would recharge its batteries. Now ESA says the longer it is out of action, the less likely it will reactivate.

“I don’t put to many hopes in having Philae reactivated,” said Accomazzo. “I consider it not impossible but extremely unlikely.”

ESA remains hopeful Rosetta can be moved back closer to the comet once it begins its journey away from the Sun at the end of the year.

“We expect the activity of the comet to go down. Possibly [we can] go again closer to the comet and maybe in the course of next year we might be able to find Philae,” said Accomazzo. 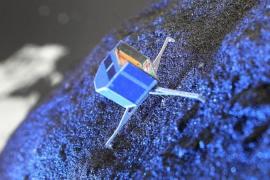 EU’s Philae lander drills into rocky surface and rotates itself to catch more sunlight so that it can recharge battery. 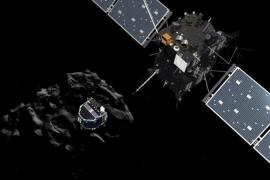 Europe’s Rosetta spacecraft separates from robot probe Philae, which is due to land on 67P comet at about 15:30 GMT.