A masked gang wielding machetes has hacked a blogger to death in northeastern Bangladesh in the third such deadly attack since the start of the year, police said.

Ananta Bijoy Das was killed in the Subid Bazar area of Sylhet city as he walked to work at around 8:40am on Tuesday morning, Sylhet Metropolitan Police Commissioner Kamrul Hasan told Al Jazeera.

“This gentleman was on his way to the office, and was around 400-500 metres away, when he was intercepted by a group of men and attacked with sharp, cutting weapons,” Hasan said.

“We believe there were four attackers. We are trying to find out the particulars of the case. Police will try to find the attackers, arrest them and put them to justice.”

Hasan said that police had collected some of Das’ writings.

“What we found is that he wrote about science and the evolution of the Soviet Union,” he said, adding that Das was also a bank employee.

Imran Sarker, head of a Bangladeshi bloggers’ association, told the AFP news agency that Das was “an atheist and wrote blogs for Mukto-Mona”, a website which used to be moderated by Avijit Roy, a Bangladeshi-born US citizen who was himself hacked to death in the capital Dhaka in February.

Roy, a Bangladesh-born US citizen, known for this writing against religious fundamentalism, and wife Rafida Ahmed, were attacked after a visit to a book fair at Dhaka University.

Brad Adams, Asia director at Human Rights Watch, said: “This pattern of vicious attacks on secular and atheist writers not only silences the victims but also sends a chilling message to all in Bangladesh who espouse independent views on religious issues.

“The Bangladesh government needs to act swiftly to bring to justice those responsible for these brutal attacks, and to make clear public statements that attacking freedom of religion and expression will not be tolerated.”

In March, blogger Washiqur Rahman Babu was hacked to death in Bangladesh’s capital by three men over alleged anti-Islamic writings, with two of the suspected attackers caught near the scene.

BREAKING: Another progressive Blogger #AnantaBijoy was killed this morning in #Bangladesh. No Justice, impunity! pic.twitter.com/oF01X9cxZt 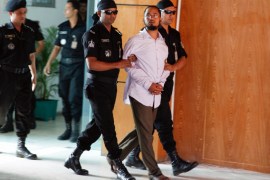 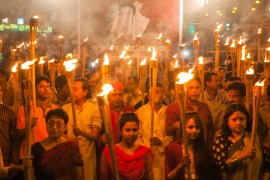 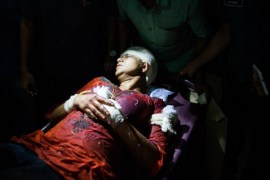