The main Syrian opposition coalition will not take part in talks initiated by the UN’s peace envoy, opting instead to send a message through one of its members, Al Jazeera has learnt.

Haitham al-Maleh, a national figure from the National Coalition, told Al Jazeera on Tuesday the opposition has refused to attend the talks, adding that he will be carrying a message for Staffan de Mistura, the UN’s peace envoy.

“I am going to meet De Mistura in Geneva on Thursday at 5pm, with a message from the coalition. We reject the way the UN is dealing with the situation and De Mistura’s methods offer comfort to neither the opposition nor the Syrian people,” he said.

“The main problem with these talks is that we know he has failed in accomplishing a freeze in the fighting in Aleppo. We do not know where this is going any more. Nobody had planned this ahead with us.

“The Syrian regime has had nothing to offer the Syrian people but barrel bombs and chemical attacks.”

Besides the government of President Bashar al-Assad, 40 Syrian groups, 20 regional and international bodies and the five permanent members of the UN Security Council will participate in the talks in the Swiss city.

“Assad and his regime – not to be confused with the Syrian state – cannot be part of a future Syria,” he said.

“Negotiating with representatives of the regime to reach a political solution is one thing; it is quite another to actually undermine the purpose of negotiation by accepting any future role for Assad or any of his regime’s leaders.”

The office of the Permanent Mission of the Syrian Arab Republic to the United Nations declined to comment on the talks.

De Mistura began talks last week with several parties involved in the Syrian conflict, including the Syrian government representative to the UN talks.

He has said the talks are closed, low-key and involve separate discussions with parties and aim to “operationalise” the Geneva Communique.

The communique was adopted after the first international meeting on June 30, 2012.

For his part, Farhan Haq, the secretary-general’s spokesperson, has said the Geneva consultations are a rolling process to seek views of all Syrian and relevant regional and international parties on the operationalisation of the Geneva Communique.

More than 220,000 people have been killed in Syria’s conflict and half of the country’s population has been displaced, prompting rights groups to accuse the international community of failing Syria. 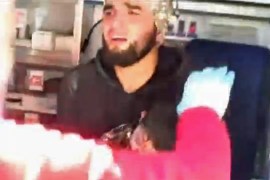