Britel outskirts, Bekaa, Lebanon – On one of the roads leading back into Britel, a large town nestled at the foot of Lebanon’s eastern mountain range, small Hezbollah convoys drove past; some fighters raised their hands in a victory sign, while others carried military equipment.

The convoy demonstrated the significance of Hezbollah’s battle to secure control of the area. Last Thursday, clashes intensified between Hezbollah and Syrian army forces on one side, and on the other, a number of armed groups, including Syrian opposition fighters and al-Qaeda’s Syria branch, al-Nusra Front. Syrian army forces alongside Hezbollah successfully pushed these groups further into the Syrian side of the Qalamoun mountain range, reclaiming several key positions.

For the last several months, skirmishes have unfolded as Syrian opposition groups holed up in the mountain range launched attacks on Hezbollah and Lebanese army fixed positions, as the opposition fighters attempted to test out the strength of their positions.

Due to the geography of Qalamoun – which is approximately 1,000 square kilometres of mountainous terrain – it has been increasingly difficult for the media to verify accurate death tolls on both sides, instead relying on the media arms of the fighting forces.

Opposition fighters in al-Nusra Front and the newly created Jaysh al-Fatah coalition claimed to have killed over 40 Hezbollah fighters, but Hezbollah’s media has put the number at much lower, saying it has lost four fighters. Meanwhile, Hezbollah’s Al Manar TV channel claims the group has killed over 20 Nusra Front and affiliated fighters since Thursday.

RELATED: Lebanon gears up for spring war against armed groups

Qalamoun is of strategic importance for both sides. The armed groups that have been holed up in the area for months aim to take control of strategic posts to gain access to key routes into Lebanon, in an effort to replenish dwindling supplies.

For the Syrian government, the mountain range is key in connecting Damascus to Homs and the rest of the Syrian coast. While this objective is important for Hezbollah, they also have other goals, including securing the supply routes in and out of Syria and preventing armed groups from infiltrating Lebanon, especially the Hezbollah stronghold of Bekaa.

As a result, Hezbollah not only sees the Qalamoun battle as a priority for its survival, but also sees itself as the first line of defence against a threat facing the entire country.

“We are not speaking of an assumed threat; we are speaking of a real aggression that exists every hour, every day, every night,” Hezbollah Secretary-General Hassan Nasrallah said in a recent speech, referring to Qalamoun. Armed groups have launched continuous attacks inside Lebanese territories while also holding dozens of Lebanese soldiers and police officers hostage, “so we need a permanent solution”, he added.

“The state is incapable of dealing with this. If it was, it would’ve done so by now,” Nasrallah said, noting Hezbollah would address the situation. While Hezbollah would not announce any official position or strategy, “when the operation begins, it will speak for itself. It will impose itself and everyone will know it has begun”.

Some residents in Bekaa villages, especially those bordering the eastern mountain range, see Hezbollah as the only viable force to protect them from a potential onslaught by other armed groups. “If Hezbollah wasn’t in Qalamoun right now, we would cease to exist,” said one resident from Nabi Sheet. “Maybe the people of Beirut aren’t aware of this, but we certainly are.”

Other residents in the area are concerned that Hezbollah’s involvement in Qalamoun may create further strife inside Lebanon, a country that is already reeling from the influx of more than 1.5 million Syrian refugees and heightened political tensions.

For its part, the Lebanese army has also beefed up its presence along the border in the last few months, managing to repel several infiltration attempts, but has made it clear it is not participating in the ongoing operation with Hezbollah and the Syrian army, except to prevent fighters from fleeing the battlefield into Lebanon.

According to an army official who spoke to Al Jazeera on condition of anonymity, “we are here to repel any attacks or infiltrations, and we are capable of doing so. [The army] is not coordinating with either Hezbollah or the Syrian army in Qalamoun.”

Hezbollah's priority right now is to secure the entire border area, prevent infiltrators and bombings and clashes inside Lebanon. In a way, it's part homeland security and part counterinsurgency.

Today there are an estimated 2,000 to 5,000 opposition fighters in Qalamoun, according to a range of estimates from local media, Hezbollah and the Lebanese army. While it is unclear how many Hezbollah fighters are involved in the Qalamoun operation, it has been widely circulated through media reports and political statements that they have been preparing for months, taking advantage of the winter to train and embed themselves in key positions inside the mountains.

But Hezbollah’s strategy for Qalamoun is expected to be different from previous battles. Keen to minimise its losses due to the fact that it is already overstretched with its presence alongside the Syrian army in Syria – and coupled with the geographic difficulties of Qalamoun – the group is expected to carry out limited smaller-scale operations, rather than one huge offensive.

“This war is not the large-scale offensive that everyone was talking about,” Amal Saad, a politics professor at the Lebanese University, told Al Jazeera. “We are seeing a relatively new strategy, which is to fight them in a limited area, to contain them, and starve them off.

“Hezbollah’s priority right now is to secure the entire border area, prevent infiltrators and bombings and clashes inside Lebanon,” she added. “In a way, it’s part homeland security and part counterinsurgency.”

According to several informed sources, Hezbollah is approaching the Qalamoun battle with the aim of “neutralising the militant threat”.

“Qalamoun is a huge mountainous area; it is impossible to have a big battle there,” one political source told Al Jazeera. The source added that Hezbollah aims to push Syrian opposition fighters into a corner, so that they are surrounded by the Syrian army on one side and Hezbollah on the other, in order to weaken them.

Another informed source said that Hezbollah knows it must clear the Lebanese side of the border of Syrian opposition fighters. “Otherwise, if they have the ability to infiltrate, we’ll be seeing car bombs going off like popcorn across the country,” the source said.

Yet Hezbollah’s involvement in Qalamoun is not supported by everyone in the country. Saad Hariri, the former Lebanese prime minister currently in self-imposed exile in Saudi Arabia, accused Nasrallah and Hezbollah of “playing with the fate of Lebanon on the edge of the abyss”.

But for Hezbollah and the Syrian army, if the Qalamoun operation proves to be successful, it will reverse the string of losses they have faced in the past few weeks inside Syria. 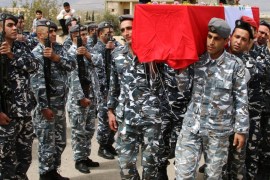 Qalamoun is of strategic importance for both the Assad regime and Syrian opposition groups. 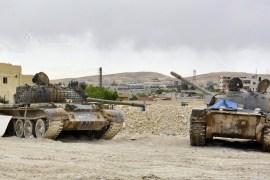 Hezbollah and opposition fighters battle for control of Qalamoun amid reports of opposition gains in Idlib province.