Migrants intercepted at sea will not “be sent back against their will”, the European Union’s foreign policy chief has told the UN Security Council, in the context of a proposed EU maritime operation against the growing wave of migrant smuggling from North Africa.

Federica Mogherini addressed the Security Council on Monday as the 28-member EU prepared to start making decisions next week on a controversial operation to identify, capture and destroy boats before they could be used by migrant smugglers.

Mogherini told the Security Council that details of the operation were still being worked out and the issue would be discussed by European foreign ministers on May 18.

“We cannot do it alone, this has to be a common global effort, that’s why we count on your support to save lives and dismantle criminal organisations that are exploiting people’s desperation,” she said.

The plan would require the approval of Libya, from where most of the boats depart. Mogherini said she also met the UN ambassador for Libya, who last week largely rejected the plan.

Critics of the proposal say military action in Libyan waters or to stop a vessel flying the country’s flag without an international mandate would break international law.

Stressing the urgency of the crisis as migrants continue to set off from the north African coast towards Europe and hundreds die, Mogherini later said the EU was prepared to take certain steps before the council adopted any resolution authorising the operation – even as a draft was expected to circulate to all 15 council members within hours.

She would not say what those steps were.

Concerns remained even among some Security Council members that the migrants themselves could be harmed, sent back or not be allowed to seek better lives.

“No one is thinking of bombing,” Mogherini said.

When asked about Russia, which has opposed destroying smugglers’ boats, she said she had not found resistance from any council member.

But she said a lot of work remained on the draft resolution, even though she was “quite confident” about political will in the council for the two main goals: saving lives and combating the migrant traffickers, some of whom she said are “linked to, and sometimes finance, terrorist activities”.

Half of migrants ‘refugees’

On his part, the UN’s special representative for international migration told the Security Council that about half of the people who reached Europe qualified as refugees.

However, powerful member states such as Britain and the eastern Europeans are already opposing that plan, with Viktor Orban, Hungary’s prime minister, calling the proposal “mad”.

The EU’s executive commission was to propose the plan on Wednesday as part of a strategy to help Italy, Greece and Malta cope with thousands of migrants.

Mogherini said the “new agenda for migration” to be addressed on Wednesday would also do more to increase search-and-rescue operations and allow for more legal pathways into Europe. Again, she did not give details.

“We know we have to tackle all aspects of this tragedy,” she said, but she also argued that “dismantling traffickers … is a way of saving lives.”

Mogherini said the migrant crisis would require an effort larger than just the EU itself.

“Europe has probably for once woken up,” she said. “We need the rest of the world to do its part as well.” 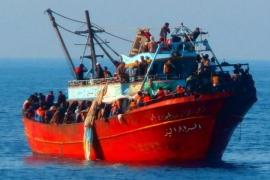 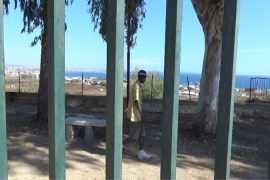