Boats carrying about 500 members of Myanmar’s long-persecuted Rohingya Muslim community have washed ashore in western Indonesia, with some in need of medical attention, according to migration official and a human-rights advocate.

The men, women and children arrived on two separate boats, one carrying around 430 people and the other 70, said Steve Hamilton, deputy chief of mission at the International Organisation for Migration in Jakarta, Indonesia’s capital.

Aid teams were racing to Mantang Puntong in Aceh province, where the boats landed, Hamilton said.

Al Jazeera’s Florence Looi, reporting from Yangon, Myanmar, said Indonesian media reported that some of the people found on the boats were ill.

Rohingya Muslims have for decades suffered from state-sanctioned discrimination in Myanmar.

Attacks on the religious minority by Buddhist mobs in the last three years have sparked one of the biggest exoduses of boat people since the Vietnam War, sending 100,000 people fleeing, according to Chris Lewa, director of the Arakan Project, which has monitored the movements of Rohingya for more than a decade.

Lewa confirmed that nearly 500 Rohingya landed in Indonesia early Sunday, with some apparently weak due to lack of food and water.

Though their first stop has in the past been Thailand, where the Rohingya waited in jungle camps while brokers collected hefty “ransoms” from family members before allowing them to continue their journeys onward, tactics have changed in recent months.

They are now being held on boats at sea, Lewa said, estimating that 7,000 to 8,000 Rohingya and Bangladeshi migrants are currently parked in the Malacca Straits, unable to disembark because of crackdowns on trafficking networks in Thailand and Malaysia, their primary destination.

Tightly confined, and with limited access to food and clean water, Lewa said she worries that the migrants’ health is steadily deteriorating. Dozens of deaths have been reported in the last few months. 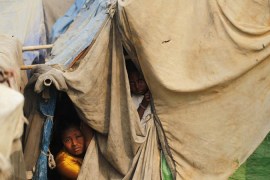 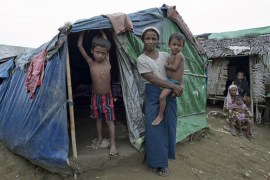 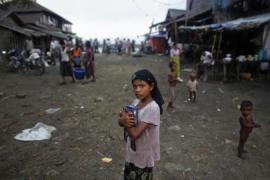 No respite for Rohingya in Bangladesh

Refugees forced to flee Myanmar are living in camps without adequate access to food or health services.