At least 400 people have been detained in Burundi following protests triggered by President Pierre Nkurunziza’s bid to seek a third term, human rights activists have said.

Carina Tertsakian, a senior Rwanda researcher with Human Rights Watch, said on Friday that more than 400 people are believed to be in detention as Burundi’s government tries to stop the protests.

Clashes between opposition protesters and police in the central African nation have left seven people dead and 66 injured.

Violence erupted six days ago after the governing NDD-FDD endorsed Nkurunziza as its candidate for the June 26 election.

The president’s supporters insist he is eligible for a third term because he was installed by parliament when he took office, as opposed to being directly elected by the people.

Al Jazeera’s Malcolm Webb, reporting from the capital Bujumbura, said Nkurunziza on Friday addressed the nation during Labour Day celebrations and said protesters were behind the violence.

Police have said some of the protesters are armed, but Webb said he has not seen any evidence supporting this claim.

Students at US embassy

Opposition figures and rights groups say that Nkurunziza’s attempt to stand for a third consecutive term goes against the constitution as well as a peace deal that ended a civil war in 2006.

Hundreds of thousands of people were killed in the 13-year conflict, which divided the country along ethnic lines, between the Hutu and minority Tutsis.

About 500 students spent the night outside the US embassy in Burundi’s capital, asking the US for protection as street protests went into their sixth day on Friday, reported the AP news agency.

In the Musaga neighbourhood, protesters marched past many smouldering barricades while brandishing wooded sticks and metal bars. They tried to reach a major road but were stopped by a cordon of riot police.

The demonstrators turned in their sticks, sang the national anthem and after a minute of silence marched back into the neighbourhood.

Many protesters say they will not leave the streets until Nkurunziza withdraws his candidacy.

Tom Malinowski, the US assistant secretary for democracy, human rights, and labour who travelled to Burundi on Wednesday, told reporters that the government had been warned of “real consequences” if the crisis escalates. 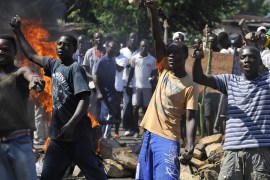 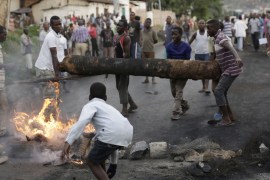 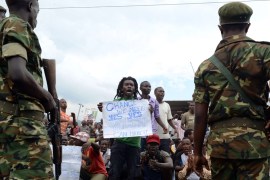