A Baltimore police officer has been charged with the second-degree murder of Freddie Gray, while five other officers will face criminal charges over his arrest and death, the city’s chief prosecutor has said.

Mosby said the Maryland chief medical examiner ruled Gray’s death as murder and that his fatal spinal injury occurred while he was riding without restraints in the van.

“Mr Gray suffered a severe and critical neck injury as a result of being handcuffed, shackled by his feet, and unrestrained inside the BPD [Baltimore Police Department] wagon,” Mosby told reporters at a news conference.

“Mr Gray indicated at least twice that he was in need of a medic. Officer Porter then physically assisted Mr Gray from the floor of the van to the bench. However, despite Mr Gray’s appeal for a medic, both officers assessed Mr Gray’s condition and at no point did either of them restrain Mr Gray, per BPD general order, nor did they render or request medical assistance.”

“The finding of our comprehensive, thorough and independent investigation, coupled with the medical examiners determination is that Mr Gray’s death was a homicide,” she said.

The Baltimore police officers’ union told Mosby the police acted “diligently” and requested a special independent prosecutor for the investigation.

“As tragic as this situation is, none of the officers involved are responsible for the death of Mr Gray. To the contrary, at all times, each of the officers diligently balanced the obligations to protect Mr Gray and discharged their duties to protect the public,” Gene Ryan, the President of the union said.

Baltimore’s Mayor, Stephanie Rawlings-Blake, later said on Friday that a decision had been made to suspend all the officers and five were in custody.

Al Jazeera’s Tom Ackerman, reporting from Baltimore, said if convicted Goodson Jr could face up to 30 years in prison.

Mosby also said the switchblade officers accused Gray of illegally carrying was in fact a legal knife, and there was no justification for his arrest.

US President Barack Obama said it was “absolutely vital” that the truth about what happened to Freddie Gray came out.

He added that justice needs to be served and the people of Baltimore need the truth.

Gray’s death on April 19, a week after his arrest, is the latest flashpoint in a national outcry over the treatment of African-Americans and other minority groups by US law enforcement.

After a night of rioting in Baltimore on Monday, protests spread to other major cities in a reprise of demonstrations last year set off by police killings of unarmed black men in Ferguson, Missouri, New York and elsewhere. 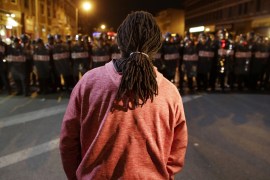 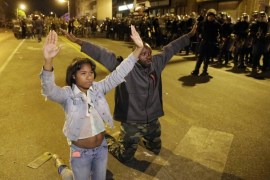 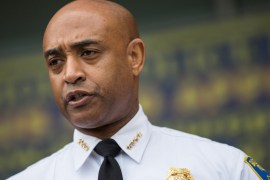 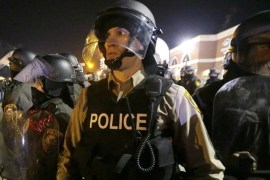 US clears policeman in Ferguson shooting