Gaza Strip – Rising poverty in the besieged Gaza Strip is forcing residents to sell their valuables in order to feed their families. In recent months, the gold market in Gaza’s old city has seen a steady flow of people selling their family gold in order to buy essentials.

“Life is very difficult because of the occupation. It’s so expensive. I have eight children and it is hard to provide for the family,” 47-year-old Zuhair Zuhair told Al Jazeera as he waited to sell a ring and necklace.

“We have two or three pieces left to sell, after that I will have to send my children to the street to sell cigarettes to bring some money.”

In August 2014, the World Bank recorded 39 percent of Gazans living in poverty on an income of less than $1.25 per day. Senior staff at Gaza’s Ministry of Economy and the UN Relief and Works Agency for Palestinian refugees told Al Jazeera that incidents of poverty had reached 50 percent.

Zuhair said he would use the expected $1,000 in proceeds to buy food and items for his children. In better times, he traded refrigerators and washing machines, but he said no one had bought anything for months.

After eight years of blockade by Israel, three devastating Israeli wars on the strip in the past six years, restrictions imposed by the Egyptian government and the closure of tunnels from Egypt, Gaza’s economy has ground to a halt.

“Now there is no work and no jobs for young people. It is difficult for young men to marry because there is no way to provide for a family,” Zuhair said.

“The international community think they are punishing Hamas by supporting Israel’s blockade, but it is the people who are suffering – and the people aren’t Hamas.”

The covered row of jewellery stores on Omar Mukhtar Street, adjacent to the Grand Mosque, still bustles with people despite the increasingly dire circumstances faced by Gaza’s 1.8 million residents.

“The people selling are usually very poor, and looking to sell small pieces, or they are newly married couples selling gold given to them at their weddings,” explained Mohammad Fahid, owner of the Hak Fahid jewellery store.

Around 70 people arrive each day to sell, according to Rafiq Issa Iyad, a third-generation dealer whose shop is located at the market’s entrance. “We don’t sell much now,” the 74-year-old shrugged. “Now people here are very poor and getting poorer. The few rich people are getting very rich, but there’s nothing in the middle.”

Last summer’s 51-day war between Israel and armed groups in Gaza claimed more than 2,000 lives – the vast majority, Gaza residents – and 17,200 homes in the Palestinian territory were either destroyed or badly damaged. Assessments of the damage have yet to be completed, and reconstruction work is moving extremely slowly.

People in Gaza are some of the most resilient I've ever met, but everyone has a breaking point.

Donor fatigue following the Israeli offensives against Gaza, competing global emergencies, including the Syrian refugee crisis and the Ebola outbreak, and divisions between Palestinian political factions explain why only five percent of the $5.4bn pledged by international donors for reconstruction has been received.

Meanwhile, around one million Gaza residents depend on food aid, while shortages of clean water, fuel and electricity worsen the daily struggle.

“Crime is getting worse – there is theft… Pressure leads to explosions. If a child cries for food and the father can’t pay one shekel for a falafel, he might do anything to get money,” Zuhair, the appliances trader, said.

The rise in crime is a sign of the deteriorating situation in Gaza, according to Scott Anderson, the deputy director of operations at the UN Refugee and Works Agency (UNRWA).

“It’s something we should watch very closely, because it points to a sense of desperation and loss of hope in the wider community,” Anderson told Al Jazeera.

“People in Gaza are some of the most resilient I’ve ever met, but everyone has a breaking point,” he said.

“We’re seeing more crimes in Gaza than a year ago. It’s petty crime: people stealing gas cylinders and plastic chairs. There have been other more serious acts – a woman in Jabalia was killed and the gold taken off her and money changers robbed – but people stealing four plastic chairs are not doing it to get rich. They’re only doing it to buy milk or food for their kids.”

Construction, industry and agriculture, previously Gaza’s major sources of private sector employment, suffer from a lack of materials, with the closed borders stifling trade activity. According to Anderson, unemployment in Gaza is at almost 50 percent:”The highest it’s ever been recorded.”

“Something has to change. You can’t go on, you can’t have an economy with no trade and no investment.”

Hamas, the Islamist party controlling Gaza, is isolated on several fronts. It is wary of another conflict with Israel, and is divided from the West Bank’s ruling Fatah party.

Despite all this, Hatem Owida, Hamas’ deputy minister for the economy, expressed optimism.

“We expect Israel will ease some restrictions, especially construction materials, so we anticipate some improvement,” Owida told Al Jazeera.

Unemployment in Gaza, having doubled from 2013 to 44.5 percent in June 2014, is thought to have reached 50 percent, according to Owida.

Owida believes any easing of Gaza’s isolation would immediately benefit the standard of living, with an expected 5-10 percent increase in gross domestic product if the borders were opened.

“In 2011 and 2012, we were searching for people to work. There was unemployment [among] graduates but in sectors like industry, construction and agriculture you couldn’t find people. We expect with open borders all indicators will be better,” Owida said.

Political divisions between Hamas and Fatah, which controls the Ramallah-based Palestinian Authority (PA) in the West Bank, are blamed for exacerbating the situation. Last year’s agreement on a national unity government barely progressed beyond the signing ceremony.

Tensions have increased recently, with the PA arresting Hamas members in the West Bank, and attacks on Fatah officials in Gaza.

These political divisions, however, are a distant concern for most of Gaza’s poor, who are focusing on more immediate problems.

“I’ll sell at whatever price they offer,” Said explained, standing under the Great Mosque’s minaret on a street leading to Gaza’s gold market.

“This is the last ring we wanted to sell, but I haven’t had work for nearly two years and I have five children to feed.” 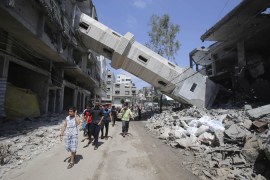 Palestinian Authority says reconstruction work in Gaza bombed by Israel could take up to five years to complete. 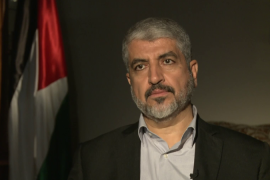 Khaled Meshaal: ‘Not a war of choice’

Hamas’ political leader discusses the latest outbreak of fighting in the Gaza Strip and the issues behind the conflict. 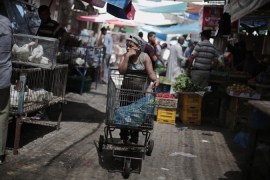 With produce and meat selling at inflated costs, many Palestinians in Gaza are surviving on emergency food rations. 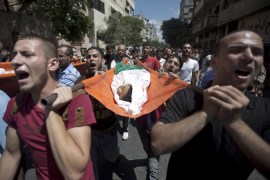 Israeli PM instructs army to prepare for wider operation in Palestinian territory, after a night of deadly bombing.