More than 2,250 California sea lions, mostly pups, have turned up starving and stranded on California’s beaches so far this year.

More than half of them turned up last month alone, making it the worst such crisis yet documented for the marine mammals.

Jeff Boehm, the executive director of the Marine Mammal Centre in San Francisco, said the fact that the sea lion mothers are unable to find food for their pups provides “an insight into the state of the ocean environment – from the point of view of the water temperatures, and fisheries”.

The tally, reported on Monday by the National Oceanic and Atmospheric Administration (NOAA), is nearly 10 times higher than the number of strandings during the first three months of last year and more than twice the number recorded in 2013, the sea lions’ previous worst season on record.

Boehm said some pups weighing only half of their normal body weight were admitted to the marine centre.

“[The sea lions] coming in to our care are seven-to-eight month-old pups. They’re little bags of bones, and they’re really in pitiful condition.”

The centre has seen a rapid steady increase of these cases since 2013. In the first 10 weeks of 2015 alone, the centre recieved 600 new patients, which is more than half of the typical admissions.

The NOAA stated that increasingly warm ocean water seems to be driving fish deeper out to sea, which in turn forces sea lion mothers to travel much farther to get food. Their pups are unable to keep up and end up stranded and starving.

Al Jazeera’s Jacob Ward, reporting from San Francisco, said that the warming has happened before.

“The 1940s, 1950s, and 1990s all saw strange warming periods along the California coast, but those were all connected to a specific weather pattern – an El Nino. This time there hasn’t been an El Nino yet. Something new is happening here,” he said, about the unprecedented weather patterns that triggered this crisis. 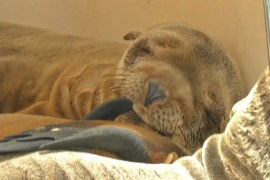 Efforts are being made to find out why thousands of pups are washing up on beaches along California’s coast. 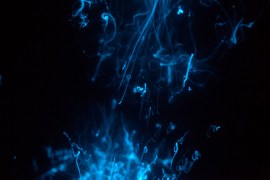 How a warming planet is threatening ocean cycles that fuel our atmosphere, food chain, and weather patterns.