Ain el-Helweh, Sidon, Lebanon – As a child, Mahmoud Salah al-Mohammad was active and sociable. He hung out with the neighbourhood kids, flirted with the girls, and was keen to get ahead in life.

But as a Palestinian refugee living in one of Lebanon’s most volatile refugee camps, he eventually came to the realisation that he had no future ahead of him.

Ain el-Helweh, located in Lebanon’s southern coastal city of Sidon, is home to more than 100,000 Palestinian refugees crammed into little more than one square kilometre. Lebanese army checkpoints at every entrance stringently check those entering and leaving, reminding the camp’s resident that the rest of the country looks upon them with suspicion.

Banned from working in over 70 professions in Lebanon, Palestinian refugees already struggle to find work. But now, with cuts in aid from non-governmental organisations and the influx of Syrian refugees in the country – including 15,000 Syrians and Palestinian Syrian refugees who have taken up residence in Ain el-Helweh – many young men in the camp have given up on their hopes for a better future, taking desperate measures to alleviate their situation.

Mahmoud was one of these men. Depressed and unable to find work, the 31-year-old decided to leave. He and seven friends from Ain el-Helweh managed to scrape together the thousands of dollars needed to pay human traffickers to facilitate their trip from Lebanon to Italy.

Mahmoud ended up paying $7,500. The journey would take them through Libya before making a dangerous boat crossing of the Mediterranean Sea.

“Living in this camp, is it any surprise? There was no work for him, no one helped him, every day was the same,” said his sister Mona, sitting in the cramped family living room. “He used to ask, ‘Why are we staying here, in this situation?'”

In a space like this where you have 100,000 Palestinians, 15,000 Syrians, 50 different ideologies and an incredibly depressing situation, of course there are going to be tensions. The recent security measures just make it much tougher.

Hussam Miqari, a member of the Popular Committee

The men left together last month, flying from Beirut and transiting through Abu Dhabi before heading to Sudan. From Sudan they travelled on foot to Libya, where they were joined by 150 or so other immigrants intent on seeking refuge in Europe.

But on March 4, after leaving from the Libyan port of Misrata on the final leg of their journey, their boat sank off the coast of Sicily, Italy.

All of Mahmoud’s friends survived the sinking and are now in Germany. Mahmoud did not. According to Palestinians following up the case in Europe, the search was called off a few days after the incident, with dozens still missing.

“He was so happy to leave,” recalled Maha, another of Mahmoud’s sisters. “Of course we were worried about him, but we were happy he was going to a better life. If he was to come back, his only options would be to become a thug or an outlaw, so anything is better than here.”

“The choice today is either finding any way to escape, or turning to extremism,” said Hussam Miqari, a member of the Popular Committee, a non-political organisation made up of camp residents who work on issues within the camp and tasked with following up on the case of the sunken ship. “The situation here is so dire, there is really no point in trying to stop them from leaving.”

According to Miqari, between 90 and 100 residents of Ain el-Helweh have attempted to travel to Europe in the past couple of months alone. “Look at this place, look at us here. People can barely afford to take care of themselves and their families,” he told Al Jazeera. “No one helps us – not UNRWA, not our fellow Arabs, no one at all. It’s only natural that people seek a way to get out.”

Not only is Ain el-Helweh desperately poor, but it is also roiled by internal political tensions. Each neighbourhood is ruled by a different faction – from Fatah and Hamas and the Popular Front for the Liberation of Palestine (PFLP), to fundamentalist groups like Usbat al-Ansar and Jund al-Sham.

Different Islamist flags can be found flying just metres away from flags belonging to secular groups.

Young men barely out of school stand on street corners holding weapons, clearly demarcating the areas that their factions control.

Tensions have further increased between the Lebanese state and the camp over the last two years as high-profile Lebanese fugitives – such as Ahmad Assir, who led deadly clashes against the Lebanese army in Sidon in 2013; Fadel Shaker, the pop singer who declared his support for Assir and fled with him following the clashes; and Shadi Mawlawi, wanted by the Lebanese state for attacks on the army in Tripoli and his allegiance to ISIL – have all sought refuge in the camp, putting its residents in the crossfire.

“In a space like this where you have 100,000 Palestinians, 15,000 Syrians, 50 different ideologies and an incredibly depressing situation, of course there are going to be tensions,” said Miqari. “The recent security measures just make it much tougher.”

Such a situation is fertile ground for human trafficking. The three women who arranged travel and documents for Mahmoud and his friends are well-known within the camp. The Lebanese authorities arrested them after the incident, but camp residents say it will not be long until a new network of middlemen pops up.

“These people basically open the road for others to seek a better life,” said one neighbour of Mahmoud’s, who asked not to be named. “We’re all dying here anyway, so what harm is there in trying to get out?”

Ain el-Helweh resident Um Omar said her 19-year-old son left the camp in early January, without telling his parents of his plans. “I refused to let him leave,” she told Al Jazeera. “But since he was seven years old he wanted to get out. He used to sit on the street day by day with no work.”

The 19-year-old is now stuck in Libya, where smugglers and armed groups are demanding more money from his family before they put him on a boat. He paid $1,500 before he left with the expectation that he would pay another $1,500 when he arrived in Libya. So far, his family has paid a total of $5,000, borrowing money from their neighbours and selling anything of value.

“I do want him to continue on his trip,” Um Omar said with a sigh. “Knowing how much he wanted to leave, I don’t want him to come back here – because he’ll kill himself.” 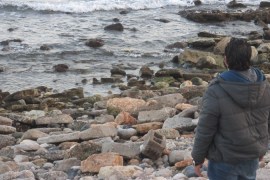 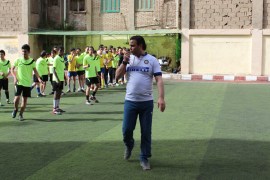 In a series of profiles of displaced Syrian families, Al Jazeera explores the ongoing costs of the country’s civil war.