Two Al Jazeera journalists held by the Nigerian military since March 24 have been released, the network has confirmed.

Ahmed Idris and Ali Mustapha were allowed to leave the Maiduguri hotel where they were detained, and they have now completed the journey back to Al Jazeera’s bureau in Abuja, Nigeria’s capital.

“We’re pleased for Ahmed and Ali that their ordeal is over. They’re looking forward to spending some time with their families and loved ones,” Salah Negm, director of news for Al Jazeera English, said.

“I know that both of them want to thank everyone that helped secure their release, including NGOs, politicians and fellow journalists.”

The Doha-based network had called for an immediate end to their detention, which began on March 24 in Maiduguri, the capital of the northeastern state of Borno. The pair were covering the Nigerian military’s operations against Boko Haram, an armed grouped that has been fighting the government since 2009.

The journalists’ phones had been confiscated by the authorities and they had not been allowed to contact the outside world.

Idris, who has more than 30 years of broadcasting experience, joined Al Jazeera in 2010.

Mustapha has been a cameraman with Al Jazeera since 2011. 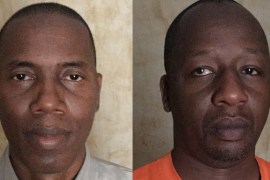 Ahmed Idris and Ali Mustafa have been detained in their hotel rooms by the Nigerian military since March 24.

Al Jazeera calls for the release of Ahmed Idris and Ali Mustafa who were detained one week ago while covering elections.

Ahmed Idris and Ali Mustafa have been detained by the Nigerian military since Tuesday.