The slow pace of the Nepalese government’s relief operations have prompted anger and frustration among the residents of the country’s earthquake-struck capital.

Thousands of people gave up on waiting for help in Kathmandu and joined huge queues on Wednesday, seeking to return to their home villages on free buses provided by the government.

“We’ve been left starving in the cold and the best this government can give us is this queue. Why are they so slow?” said Rajana, who slept outdoors for days in Kathmandu with her two young children.

“I keep hearing on the news that all governments and aid agencies are here, but where are they?

“Our government is totally absent. Forget shelter, they couldn’t even give us water,” said Rajana, who goes by only one name.

Al Jazeera’s Faiz Jamil, reporting from Kathmandu’s main bus station, said people were willing to make two to three-day trips just to get away from the potential threat of further tremors in the city.

One of the young men at the station told Jamil he was trying to get to his village 900km away.

“There is no one helping us here so it is safer for me to go home,” he said. “We’re all worried about getting sick and the city isn’t safe.”

Jamil said whoever was staying behind was uncertain about the future.

“People are asking when is the next earthquake. They are uncertain about how long they will have to be outside in the open, but they stay there and they still help each other,” he reported.

The government acknowledged it had been overwhelmed by the devastation from Saturday’s 7.8-magnitude earthquake that killed more than 5,000 people across Nepal – the deadliest in more than 80 years.

“There have been some weaknesses in managing the relief operation,” Minendra Rijal, the country’s communications minister, told Nepal’s Kantipur Television.

“The disaster has been so huge and unprecedented that we have not been in a position to meet the expectations of the needy people.

“But we are ready to accept our weakness, learn and move ahead in the best way possible.”

There was also desperation in devastated rural areas. People have been pleading to be airlifted out when the occasional helicopter has reached their villages with relief supplies.

“More than 200,000 people are homeless. We’ve been told that materials are on their way, but we haven’t received them yet,” he said.

The UN is appealing for $415m to provide for vital needs over the next three months.

Jamie McGoldrick, the UN’s humanitarian coordinator for Nepal, said the response to date was encouraging, but those efforts needed to be maintained, especially in remote areas.

McGoldrick noted that the coming monsoon season would like add a logistical challenge to relief efforts, adding to the urgency. 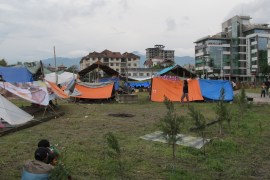 Nepalese pick up the pieces after devastating quake

Residents of Kathmandu now cook in makeshift camps after a powerful earthquake flattened their homes. 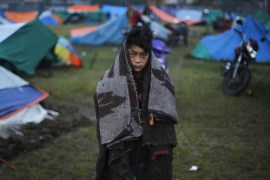 ‘What time is the next earthquake?’

Tent cities spring up across Kathmandu, as locals battle the elements, fearing another quake is around the corner. 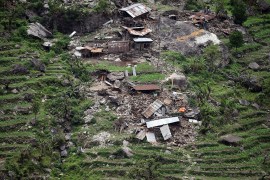