Al-Shabab gunmen who killed 148 people at Garissa University College in Kenya as they shouted “God is great” appeared to have planned extensively, even targeting a site where Christians had gone to pray, survivors have said.

One of the first things the fighters did when they attacked the campus early on Thursday, survivor Helen Titus said, was to head for a lecture hall where Christians were in early morning prayer. Al-Shabab is a Somalia-based armed group with ties to al-Qaeda.

“They investigated our area. They knew everything,” Helen Titus told the Associated Press at a hospital in Garissa where she was being treated for a bullet wound to the wrist. Officials said 79 people were wounded.

Titus, a 21-year-old English literature student, said she covered her face and hair with the blood of classmates and lay still at one point, pretending to be dead.

Al Jazeera’s Malcolm Webb, reporting from outside the campus, said bodies had been taken to the capital Nairobi and that relatives of the victims had been told to collect them.

“Forensic investigations have been going on [at the campus] and people have been waiting to learn more about what exactly happened,” he said.

Police on Friday were at the campus, taking fingerprints from the bodies of the four assailants and of the students and security officials who died, for thorough identification purposes. The northeastern Kenyan town lacks the facilities to store all the bodies.

The interior ministry on Friday raised the death toll from 147 to 148. The dead included 142 students, three policemen and three soldiers.

Thursday’s attack, in which all four assailants were killed, was the deadliest on Kenya’s soil since the 1998 bombing of the US embassy in Nairobi, which killed more than 200 people.

Al-Shabab is also blamed for the siege on a shopping mall in Nairobi in September 2013, which killed 67 people.

Beatrice Debut, a spokesman for the medical charity MSF, told Al Jazeera on Friday the charity was providing support to the Kenyan Ministry of Health at Garissa Hospital.

Survivors of the attack suffering from gunshot and blast wounds were receiving treatment, an MSF statement said, adding that those who sustained injuries from shattered glass during their escape were among those being treated.

Meanwhile, Pope Francis on Friday condemned the massacre, calling it an act of “senseless brutality” and said he would pray for the perpetrators to change.

The pontiff’s feelings were expressed in a telegram sent by his Secretary of State Pietro Parolin to Cardinal John Njue, the President of the Kenya Conference of Catholic Bishops, on Good Friday, the holiest day of the year in the Christian calendar.

US President Barack Obama also condemned “the terrorist atrocities” and confirmed that he would continue with plans to visit Kenya later in the year.

“The future of Kenya will not be defined by violence and terror; it will be shaped by young people like those at Garissa University College – by their talents, their hopes, and their achievements. This is a message I will relay to the Kenyan people when I visit Kenya in July,” Obama said in a statement.

Al-Shabab controlled large parts of Somalia’s capital, Mogadishu, but has been forced out by African Union forces.

The group has over the years carried out deadly attacks in neighbouring Kenya, which sent troops to Somalia in 2011 following cross-border raids and attacks on its coastal towns blamed on al-Shabab. 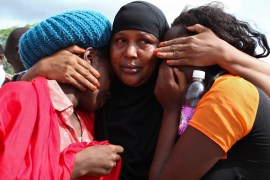 Many families still desperately searching for loved ones after al-Shabab attack on college leaves at least 147 dead.