A Canadian teacher has been found guilty of assault and child sexual abuse and sentenced to 10 years in jail by an Indonesian court, while his Indonesian assistant remains on trial for the same charges.

Gasps could be heard as the verdict was read out in a court room packed with parents and teachers from the Jakarta Intercultural School on Thursday, where the incidents against three children are alleged to have taken place.

Throughout the trial Neil Bantleman has vigorously protested his innocence and has been strongly supported by the school community, many of whom claim the allegations of child abuse against him and his teaching assistant Ferdinand Tjiong are unfounded.

The defence have suggested a $125m lawsuit filed by one of the victims’ mothers against the Jakarta-based school is the true motivation behind the case – an accusation denied by the prosecution.

In his closing remarks the teacher said he would appeal the decision arrived at by the three judge panel at South Jakarta District Court – a statement greeted by applause and raucous cheers.

“We will fight until the truth comes out,” Bantleman added, as he was lead away, surrounded by journalists and prison guards.

The trial of Tjiong is continuing at the same court.

‘No reason to forgive’

The judges roundly rejected large parts of the defence’s argument and expert testimony, including contradictory medical reports from a Singaporean clinic that found no evidence of sexual abuse in the case of one child.

Claims that the children had been lead to invent the incidents with suggestive questioning were also rejected by the court.

Presiding judge Nur Aslam claimed that the Mr Bantleman’s team had attempted to discredit the panel of judges by leaking information to the media about the closed trial. Nur censured Bantleman for expressing no regret at his alleged crimes.

“There is no reason to forgive the defendant, he should be found guilty, she said.

In December, four male cleaners at Jakarta International School were sentenced to eight years in prison for sexual abuse, and a female cleaner received seven years as an accomplice.

A sixth cleaner committed suicide while in police custody.

Addressing reporters in front of her husband’s cell after the verdict, Tracy Bantleman said she was “appalled” by the judge’s decision and was not a fair reflection of the evidence presented in court.

In a statement released shortly after the end of the court session the US Embassy said: “Serious questions have arisen in this case regarding the investigative process and lack of credible evidence against the teachers. In light of this, we are deeply disappointed with this outcome.” 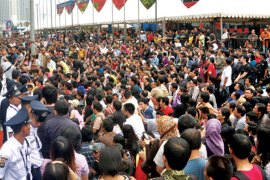 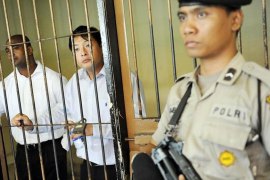 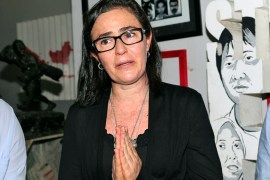 Rodrigo Gularte has been diagnosed with paranoid schizophrenia, but his illness may not stop a 12-man firing squad.