Often seen as a bellwether for national politics, the elections at Birzeit University, near Ramallah, saw Hamas supporters defeat rivals aligned with Fatah. The results came as a surprise at a campus historically known for its allegiance to factions aligned with the Palestine Liberation Organization (PLO), especially Fatah, the ruling party of Palestinian President Mahmoud Abbas.

For years, Palestinian leaders have been promising general elections, which have not been held since Abbas was elected in 2006. This has lent credence to these student elections, which are often used as a litmus test for support for politicians and parties, especially at Birzeit, an institution known for its political activism and academic prominence.

Despite repeated attempts at reconciling, Hamas and Fatah remain bitterly divided today, unable to decide on how or when to hold elections. The two groups traded verbal barbs following the Birzeit elections, which saw the Islamic Wafaa bloc defeat the Martyr Yasser Arafat bloc, winning 26 to 19 seats in last Wednesday’s vote.

Fatah supporters said the Hamas-aligned group capitalised on the movement’s performance in last summer’s Israeli war on Gaza, while the Islamic Wafaa bloc attributed the results to people’s disenchantment with the West Bank’s ruling party and the PA’s security coordination with Israel.

Fatah has to be pleased, because the defeat rids it of the permanent ruling-party mindset. Hamas, on the other hand, will have to become more realistic and responsible, and decrease its reliance on slogans.

“This was the most important event to have taken [place] in Palestine since the 2006 elections,” said Lama Khater, a Hebron-based writer and activist. “It reflected a shift in the West Bank’s public mood; more have grown weary of Fatah’s policies and its internal schisms, as well as its inability to understand the people’s needs.”

In addition, supporters of the Palestine Front for the Liberation of Palestine received 695 votes and an alliance of left-wing parties received 147. In 2014, the Fatah bloc won 23 out of 51 seats, edging out the Hamas bloc by one seat.

Palestinian politicians weighed in on the 2015 Birzeit student elections, with some, including Hamas spokesperson Sami Abu Zuhri, calling it a victory for the “resistance”. Abu Zuhri said the victory was particularly important because the group’s members, on and off campus, are regularly targeted by the PA security apparatus.

Fatah spokesperson Osama Qawasmeh, meanwhile, acknowledged that “internal mistakes” had led to the defeat of the Martyr Yasser Arafat group. “We admit that we erred on several platforms, but we will rectify those very soon,” he said. “We also congratulate Hamas. These elections represent the very same true democracy that Hamas prevents in the Gaza Strip.”

Some observers called the results a win-win situation for both parties, and for the Palestinian public in general.

“Fatah has to be pleased, because the defeat rids it of the permanent ruling-party mindset,” said Saleh Masharka, a professor of media at Birzeit University. “Hamas, on the other hand, will have to become more realistic and responsible, and decrease its reliance on slogans.”

The university vote comes at a time when attempts at solving long-standing issues between Hamas and Fatah have had little success. Last week, a bid to resolve a dispute over salary payments for Gaza-based employees failed after an official delegation visiting from Ramallah was prevented from leaving their hotel to attend meetings. Hamas said it was their “choice” not to.

The delegation of PA government officials returned to Ramallah after talks between the two, following the hotel incident, reached a stalemate. Since a reconciliation agreement was inked between the parties around this time last year, Hamas has demanded that the PA also pay for its 50,000 employees, and expressed anger that approximately 70,000 PA employees living in Gaza are still on the Ramallah payroll despite not showing up to work.

“The division is alive and well,” said Mukhaimar Abu Saada, a Gaza-based political analyst, referring to the schism between Hamas and Fatah. “As long as the employee issue is not resolved, then reconciliation will remain ink on paper, and little will be done in the way of rebuilding Gaza, which still lies in tatters.” 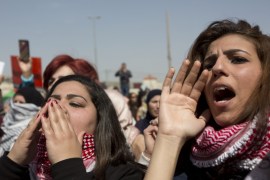 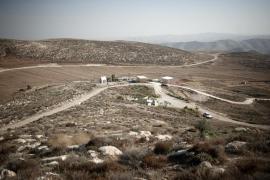 Living illegally in the West Bank

‘We trust the universe, we trust the earth, we trust God, that whoever needs to be here will be here,’ resident says.