His arrest on February 25 was placed under a military gag order for several weeks before the charges were made public in late March. He was accused of espionage, assisting an enemy during wartime and contact with a foreign agent.

One of Israel’s longest-serving prisoners, Maqt was first arrested in August 1985 for participating in resistance against the Israeli occupation of the Golan Heights, and he spent 27 years behind bars before being released in 2012.

Since his release, he has dedicated his time to documenting Israeli military activity along the Israeli-Syrian front in the Israeli-occupied Golan Heights and the army’s interaction with Syrian armed groups, most notably the Syrian branch of al-Qaeda, al-Nusra Front. He would then post all his information and documentation, including photos and videos, on his Facebook page.

According to Israeli media, which dubbed Maqt the “Facebook Spy”, the indictment references his posts on his Facebook page as evidence. Bizarrely, the indictment details the number of “likes” and “shares” his posts received, claiming that such posts “incited other Facebook users” to share “extremist sentiments” against Israel.

What Maqt’s case seems to have actually done, however, is bring to the forefront again the question of Israel’s involvement in Syria’s war, particularly regarding its relationship with al-Nusra.

When he was released from prison in 2012, he knew nothing about the internet and technology. He taught himself how to use these things, and then began documenting events taking place along the technical fence.

by Friend of Sidqi Maqt

According to a friend of Maqt’s, the information he posted online highlighted in detail the level of interaction between Israel and al-Nusra, an alliance Israel would not be keen on publicising.

“When he was released from prison in 2012, he knew nothing about the internet and technology. He taught himself how to use these things, and then began documenting events taking place along the technical fence,” the friend, who wished to remain anonymous for fear of repercussions, told Al Jazeera. “He would take videos and pictures of meetings between Israeli army personnel and al-Nusra Front fighters. In one recording, he documented two white buses with al-Nusra fighters coming into an Israeli army base.”

Several of his videos were aired by Syrian State TV and al-Ikhbariyeh television station.

The Druze in the occupied Golan Heights, amount to about 23,000 people, with approximately 18,000 who refused to take Israeli citizenship after the area was annexed from Syria by Israel in 1981. Maqt is among those who refused.

Two weeks ago, Hilal Halabi, an Israeli soldier from the Galilee, was indicted by a military court with illegally sharing classified information with Maqt regarding Israeli army activity along the technical fence. According to the Jerusalem Post, the Central District Military Court has issued a gag order over the entire issue.

Furthermore, the judges in Maqt’s case have refused to let him be represented by the lawyers he chose, claiming they do not have the necessary level of security clearance needed to deal with the evidence. According to his friend, “Maqt is now in solitary confinement and his health is seriously suffering.

“The Israelis are trying to make this a security issue, when that’s not the case. His information was always public,” he said. “The Israelis are annoyed about the videos because they confirm the reports made by UNDOF.”

Since 2012, quarterly reports issued by the United Nations Disengagement Observer Force (UNDOF) – the UN force based along the ceasefire line separating the Syrian Golan from the Israeli-occupied Golan – have revealed frequent interactions between the Israeli army and fighters from armed groups, including the treatment of wounded, discussions between soldiers and fighters through the fence, and the crossing of trucks from the Syrian side to the Israeli side. UNDOF regularly observed armed individuals removing landmines along the technical fence while the Israeli army observed from its positions, as well as Israeli army personnel handing boxes to armed members of the opposition. 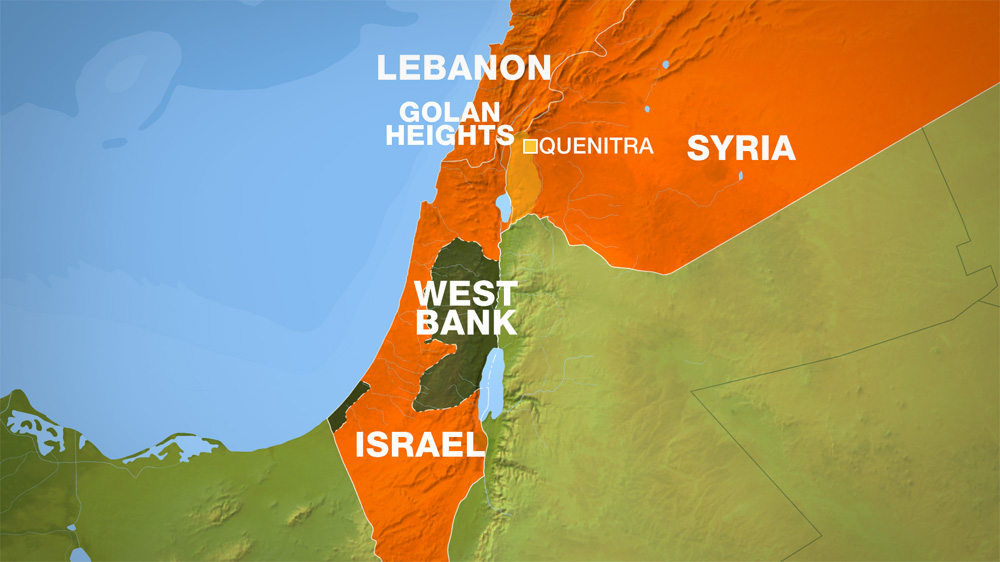 In August 2014, al-Nusra Front kidnapped 45 members of the UN peacekeeping force in Quneitra before releasing them a week later to the Israeli side of the ceasefire line. The Quneitra crossing was also overrun and captured by armed groups including al-Nusra, putting them in direct contact with the Israeli army on the other side.

While the Israelis have publicly admitted to giving medical and humanitarian support to armed members of the opposition inside Israeli territory, with numbers indicating at least 1,500 Syrians have been treated in Israel – the vast majority of them fighters – they have stopped short of admitting to directly aiding al-Nusra.

But a Wall Street Journal report published last month quoted an Israeli military official as saying they are familiar with the forces operating along the northern front, and they do not ask who the wounded are or screen any of them.

“We know that Israel is providing medical services to wounded rebels; the priority seems to be on mainstream groups, but it is possible that al-Nusra members are also benefiting,” Noah Bonsey, a senior analyst with the International Crisis Group whose work focuses on Syria, told Al Jazeera. “In any case, the role of al-Nusra in southern Syria is often exaggerated; in most places, mainstream groups appear stronger.”

While Israel insists it does not play a role in the Syrian conflict, its actions on the ground suggest otherwise.

Since 2012, Israel has conducted at least nine air strikes in Syria, and has killed several Syrian soldiers based in the Golan, the first of whom was killed in November 2012. The latest air strike it conducted was in January 2015, killing six members of the Lebanese group Hezbollah and an Iranian in the southern province of Quneitra. None of the Israeli strikes have targeted members of al-Qaeda, who are positioned directly on the ceasefire line.

Israel has made it clear that it considers Hezbollah and Iran, key players on the side of the Syrian government in the ongoing conflict, a bigger threat than the presence of al-Nusra on its northern front. Yet, for Hezbollah and its allies, Israeli action in Syria – ranging from cross-border artillery fire in the Golan to targeted air strikes – directly supports armed groups such as al-Qaeda’s al-Nusra Front, therefore making them one unified front.

What Israel and Hezbollah agree on is that there's no longer two fronts, there's one connected front.

by Noah Bonsey, senior analyst with the International Crisis Group

In several speeches, Hassan Nasrallah, secretary-general of Hezbollah, has accused Israel of aiding al-Nusra Front, calling it the new “Lahd Army”, in reference to the South Lebanon Army under the command of Antoine Lahd which worked as a proxy for Israel in south Lebanon during the civil war until its withdrawal in 2000.

But analysts say this fear of Hezbollah in the Golan is misplaced, as Hezbollah’s purpose in Syria is to ensure the survival of the government, rather than focus its attacks on Israel.

RELATED: Lebanon gears up for spring war against armed groups

“Hezbollah’s role in Syria is to help the regime protect Damascus … the aim is to secure the two main highways that link Deraa and Quneitra to the capital,” Aurelie Daher, a researcher affiliated with the Center for International Studies at Sciences Po in Paris and author of Hezbollah: Mobilization and Power, told Al Jazeera. “According to Hassan Nasrallah, the military strategy is drawn up by the Syrian army. Hezbollah is just giving a hand in the fighting.”

In the last few years, a vacuum has been created in southern Syria as a result of the collapse in security; the regime and its allies have lost key positions and are desperately trying to regain their foothold in the area, while Israel seems to prefer having the armed opposition, including al-Nusra Front, as a buffer between itself and the growing presence of Hezbollah.

For Daher, there is little reason to conclude that Hezbollah would use its position in the Golan to launch attacks on Israel. “It is not in the plans of Hezbollah, Iran or Syria to attack Israel,” she said. “There is nothing for them to gain in doing so. It would actually make things more complicated, as their main targets are the jihadists and other Syrian opposition groups and they need to be able to remain focused on them.”

Hezbollah describes its objective on the Quneitra front as helping the regime regain territory in order to prevent Israel from establishing a “security zone” in cooperation with rebel groups.

“They describe the need to gain ground along the Golan as a defensive measure, though, of course, their assets there could also be employed offensively,” Bonsey said.

“What Israel and Hezbollah agree on is that there’s no longer two fronts, there’s one connected front.”