Sri Lanka’s parliament is due to debate a bill limiting presidential powers.

This is seen as an attempt to roll back the legacy of former leader Mahinda Rajapaksa, who vastly expanded his powers while in office.

Rajapaksa was unexpectedly defeated in elections in January.

Some analysts say complacency cost him  the presidency. He considers his defeat a conspiracy.

Below is an edited transcript:

Al Jazeera: The new government, after coming to power, said they have credible reports.

Rajapaksa: That’s what they always say, no? They have credible reports, they have everything …Now they are attacking me personally, my family, filing cases against us. So this is just to harass us, and they do not want anybody from our family to come to politics.

Al Jazeera: So at no time on the night of election were there any plans by you to try and stay in office by force?

Rajapaksa: No, I had decided if I lose I will give it up. That’s why at 5:30AM I left that place.

Al Jazeera:  Internationally you were acknowledged for allowing this smooth transition of power. Would you say that that decision was purely made by yourself or were you pushed?

Al Jazeera: You are known as the president that brought an end to almost 30 years of conflict in this country; one of the most brutal conflicts in the world. However, now six years after the conflict, your image as a peace broker has begun to erode, there were allegations that you were beginning to behave like a dictator, that you were turning a blind eye to corruption. Is this one of the reasons for your election defeat?

Rajapaksa: It was a well-managed mudslinging campaign against me.

Al Jazeera: There also serious allegations across the board of widespread corruption and nepotism against the Rajapaksas…

Rajapaksa: No…other than Namal, I didn’t bring anyone to pollitics. It was by the earlier leaders.

Al Jazeera: So there was your brother who was the defence secretary, another brother the Minister of Economic Development.

Rajapaksa: I had to get him down, I had to do that.

Al Jazeera: The speaker of parliament?

Rajapaksa:  He was elected by the people.

Al Jazeera: The last few weeks has seen a crackdown on different players in the previous government. Your brother was arrested, your brother-in-law was accused of corruption with regards to the national airline, your cousin was accused of arms-dealing in Ukraine. Do you see this as a witchhunt?

Rajapaksa: This is a witch-hunt … I agree with you.

Al Jazeera: That was a question!

Rajapaksa:  I agree with the question.

Al Jazeera: Why would you say this is happening?

Rajapaksa: They are frightened of me. If not me, it’s the name, so they’re just attacking us.

Al Jazeera: What are they frightened of?

Rajapaksa: I don’t know…they don’t want us involved (in politics). They think I might contest  next time or something like that. We have been in politics since the 30s, I’ve seen losses but we have never experienced something like this.

Al Jazeera: The government says there will be no kangaroo courts, but that they will take action based on evidence.

Rajapaksa: Who gives a decision to arrest? Who gives the order? It’s all them. 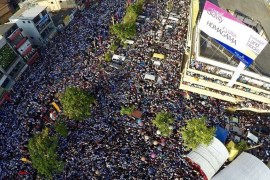 At least 20,000 people gather in Colombo urging former leader to return to politics a month after his electoral defeat. 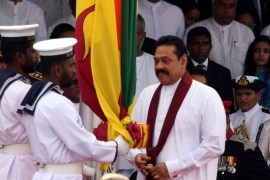 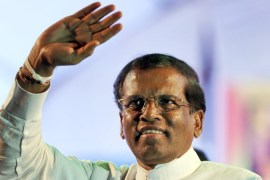 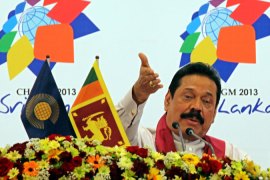 Panel to probe allegations of atrocities during final stages of civil war between government forces and Tamil rebels.