Nursultan Nazarbayev has won 97.7 percent of the vote in Sunday’s election, securing a new five-year term, according to the Central Election Commission citing early data.

Nazarbayev, 74, has ruled oil-rich Kazakhstan since 1989.

The Central Asian country’s marginalised opposition did not put forward any candidates for the election and Nazarbayev ran against two candidates widely seen as pro-government figures.

“Polls show that most people in Kazakhstan do support their president. The appearance of democracy may be enough for them – even if it’s not the same as the real thing,” he said.

Kazakhstan, with an estimated population of 17 million people, is surrounded by Russia and former Soviet countries.

Nazarbayev, officially titled Leader of the Nation, is a former steelworker who promoted market reforms.

With the help of more than $200bn in foreign direct investment, he has turned his steppe nation into the second largest economy in the former Soviet Union and No 2 post-Soviet oil producer after Russia.

Turgun Syzdykov, a 68-year-old former provincial official who campaigned on an anti-globalisation platform, represented the Communist People’s Party of Kazakhstan.

Abelgazy Kusainov, 63, who has held several important governmental positions and currently heads the national federation of trade unions, stood as an independent after running a campaign touching on Kazakhstan’s environmental problems.

With the oil capital halved in value due to falling oil prices and the Russia-Ukraine tension creating uneasiness in the country, the snap elections were called to bring in more stability to the country.

Senate leader Kassym-Jomart Tokayev stressed on Sunday the importance of implementing programmes of state reform directly associated with Nazarbayev and his campaign.

“Today we vote for the prosperity and progress of Kazakhstan,” he said.

“This is not an election, it is a re-election,” Dosym Saptaev, director of the Kazakhstan Risks Assessment Group, a think-tank based in the largest city Almaty, told the AFP news agency. 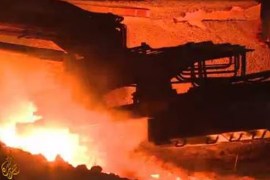 President Nazarbayev must turn nation’s industrial fortunes around or find something new for redundant workers to do.