A few days after fighters with the Islamic State of Iraq and the Levant (ISIL) invaded Syria’s Yarmouk this month, Omar, a Palestinian refugee who lived in the camp, fled to neighbouring Yalda.

“It was a mess. They [ISIL] came in from Hajar al-Aswad area, and then not only were they barbaric, but the regime shelling of the camp intensified even more. It was more barrel bombs everywhere,” Omar told Al Jazeera.

According to the Palestinian Network of Civil Society in Syria, an estimated 4,000 people have fled the camp to adjacent areas, many of which are also besieged by the regime.

Omar, like the other residents interviewed for this article, spoke under a pseudonym because of security concerns. “I’m depressed,” he said. “I mean, even after enduring a three-year-long siege, we still remained in the camp. [Now we] have to leave after a group of barbarians entered the camp, beheading people.”

The UN Security Council has expressed its grave concern for the situation in Yarmouk and its concern for a massacre as the violence intensifies. Ahmad, one of the residents who remained in Yarmouk, said the massacre has been ongoing.

“The camp is a butchery,” he told Al Jazeera. “From one side you have barrel bombs [dropped] by the regime, and on the other, clashes between opposition forces and ISIL as well as their allies, Jabhat al-Nusra [al-Qaeda’s branch in Syria].”

RELATED: ISIL takeover of Palestinian camp in Syria a ‘siege within a siege’

Many within the camp said they were struggling with feelings of despair and cynicism, and directed some of their anger towards the Palestinian Liberation Organization (PLO) and the international community for failing to intervene during a years-long siege imposed by the Syrian regime and its supporters. The ISIL invasion has compounded that crisis.

As they struggle for food and water, which has been cut off due to the regime-imposed siege, the residents in the camp have attempted to stick together. “We only have each other. We seek shelter with each other. Everyone else failed us,” said Ahmad. Food and water has been cut off for more than 215 days, while the UN refugee agency (UNRWA) and international organisations have encountered difficulties in distributing aid within the camp.

The UN has recorded that one-third of Palestinians in Syria were living in Yarmouk. Out of the 160,000 Palestinians who were originally in the camp, only 18,000 remain today. As the conflict has turned more violent, many have been forced to flee. Some went to Europe and others relocated to various parts of Syria and neighbouring Arab states.

From reports coming out of the camp, it appeared ISIL forces were able to advance into the camp with the assistance of Nusra. Additionally, as ISIL fighters slowly withdraw, they are turning over the areas they invaded to Nusra.

You have ISIL at one end, and the regime at another. If we ask for the regime for instance to release the Palestinian prisoners held in prisons, they will reply that we ask ISIL to release the Syrians they have captured... We cannot interfere in their internal politics.

The ISIL invasion has caused even more people to flee the camp into areas such as Beit Sahem and Yalda, where the lack of aid has resulted in soaring costs for daily necessities, with a loaf of bread going for $10.

For those who remain in the camp and in besieged neighbouring areas, a calm future seems distant. Omar says they are “waiting for death to knock on the door”.

Surrounded by destroyed buildings and closed shops, streets that once flourished in the camp are largely empty. Residents search for food wherever they can.

“There is nothing. No food. No water. Bombs on our heads and silence from the international community,” said Amjad, a Palestinian activist from the camp.

Some in the camp are calling on those who left to return to the camp. “It is no longer about resistance. It’s about remaining. It’s our existence,” said Ahmad, noting the camp has transformed into a battle field, with Palestinian refugees wedged in the middle.

For others like Omar, the camp is already gone. “I will never return with ISIL in the camp,” Omar said. “And even if they leave, the camp is gone, destroyed… All of it is gone.”

In a statement on April 6, Ahmad al-Majdalani, a member of the PLO’s executive committee who is responsible for the Yarmouk file, said a Palestinian delegation would attempt to find a solution for Yarmouk.

Majdalani made several trips to Syria prior to the invasion of ISIL in attempts to ease the siege, to no avail.

Asaad Abdul Rahman, an independent member of the PLO executive committee and a Palestinian political analyst, said the PLO is unable to do more because of restrictions preventing the PLO from interfering in the internal politics of another nation.

“The PLO has been helping Palestinians that fled the camp,” Abdul Rahman told Al Jazeera. “However, as we learned from what happened in Jordan, Lebanon, and Iraq, it is detrimental when we interfere in ongoing internal Arab affairs.” He described it as a “catch 22, where whatever we [the PLO] do, we can’t win”.

Abdul Rahman believes the only way to help those in Yarmouk is to assist them in resettling outside the camp. “There are so many sides to this,” he said. “You have ISIL at one end, and the regime at another. If we ask the regime for instance to release the Palestinian prisoners held in prisons, they will reply that we ask ISIL to release the Syrians they have captured. It’s not an easy task, and we cannot interfere in their internal politics.”

Palestinians in the occupied territories and abroad, meanwhile, have tried to mobilise for the sake of the camp, demanding safe passage for aid to enter and for residents of the camp to be safely evacuated.

As the PLO attempts to secure a safe passage, they are doing so without providing assurances to those who leave that they will not be arrested by the regime.

Abir Kopty, a Palestinian activist and blogger based in Berlin and active in mobilisation for Yarmouk, told Al Jazeera: “So far, we’ve only been hearing empty statements from the PLO. They need to engage in intensive and immediate contacts with the regime, and international human rights organisations to ensure safe passage to the Palestinian and Syrian residents of besieged Yarmouk and to ensure no one is detained by the regime if they leave the camp.”

Omar speaks with bitterness on the efforts by the PLO and other organisations: “Forgive me, but now there is nothing left to say. Pray for us.” 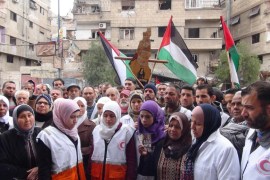 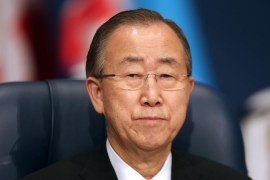