Chilean authorities have said they fear a new crater could be opened up on the Calbuco volcano – potentially triggering a violent new eruption.

A day after Calbuco erupted for the first time in more than 50 years on Wednesday night – and then subsequently erupted again several hours later early on Thursday – authorities were continuing to monitor activity at the volcano.

A 20km evacuation zone was still in effect around the volcano on Friday morning, following the evacuation of some 5,000 people.

Rodrigo Alvarez, director of Chile’s Geological and Mining Service, which monitors seismic activity, said the danger level at volcano had not diminished.

“We believe the Calbuco volcano could open up a new crater and generate a more aggressive eruption,” Alvarez said.

President Michelle Bachelet, who flew to the affected area on Thursday, said: “We don’t know how the situation is going to evolve. It’s pretty unpredictable.”

Al Jazeera’s Lucia Newman, reporting from Temuco, about 300km north of the volcano, said the smell of smoke was prevalent in the air late on Thursday night. Temuco is located close to the Villarrica volcano, which exploded spectacularly earlier this year.

“There is a real feeling of uncertainty here. People are very nervous,” our correspondent said.

“Calbuco is one of the three most dangerous volcanoes in Chile, but even though everyone knew it was active – there was no warning ahead of it erupting.”

Authorities declared a state of emergency, sent in the army and evacuated a 20km radius around the volcano after the twin eruptions on Wednesday night and Thursday morning.

The 2,000-metre volcano, located some 1,400km south of the capital Santiago, had last erupted in 1961 and showed light activity in 1972, the National Geology and Mines Service said.

It is the second eruption in Chile since March 3, when Villarrica emitted a brief but fiery burst of ash and lava. Chile has about 90 active volcanoes. 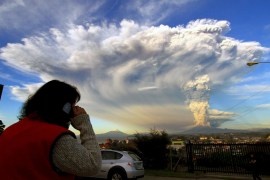 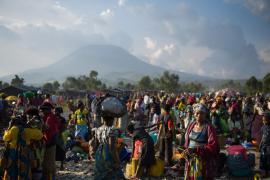 Mount Nyiragongo is reopening to the public, allowing visitors to climb the peak and see the world’s biggest lava lake.