Security forces in Guinea have killed a protester and wounded four others, a medical source and witnesses have said, as opposition supporters clashed with police during anti-government rallies.

“The victim was beaten with batons by security forces,” said a hospital source in Labe, the country’s second-largest city and an opposition stronghold.

The protester’s body was carried to a regional hospital by fellow activists who cried “God is greater”, “death to the dictator” and “justice for all”, witnesses said.

In the suburbs of the capital Conakry, young people took up positions behind makeshift barricades made from tree trunks and other debris and threw rocks at police, who responded with tear gas.

Two residents in Conakry’s suburb of Bambeto said they heard a spurt of gunfire at noon, without specifying the origin.

“Since this morning, we are trying to stop protesters from gathering. Whenever we see a group we try to disperse them rapidly,” said a police officer, requesting anonymity.

He said he was not aware of reports of gunfire.

Presidential and legislative elections since 2010, when Guinea emerged from decades of military rule, have been marred by violent protests, with parties divided along ethnic lines.

The opposition accuses the government of breaking a promise it made in 2013 to hold long-delayed local elections before a presidential vote due in October this year.

President Alpha Conde told journalists during a visit to Paris on Wednesday that there were no plans to change the electoral calendar.

Members of the opposition said on Thursday that police forces were surrounding the houses of their leaders to prevent them from participating in the protest.

“They blocked the two exits with pick-up trucks and a van with water cannons. Clearly, they don’t want leaders to get out and are trying to control the protest,” said Souleymane Tianguel Bah, spokesman for the UFDG party.

Sidya Toure, a former prime minister and now a member of the opposition, said security forces were also outside his home. 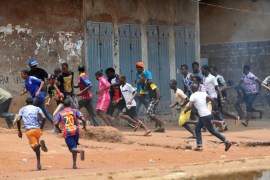 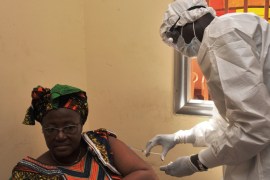 Residents’ movement to be restricted in five provinces in country’s west after new spike in recorded cases.