The Armenian Apostolic Church has held a service in which it canonised 1.5 million Armenians it says were massacred during the last years of the Ottoman empire, as the country prepares to mark a 100 years since the mass killings.

The ceremony outside Armenia’s main cathedral, Echmiadzin, close to the capital Yerevan, ended at 7:15 pm local time, (15:15 GMT) or 1915 according to the 24-hour clock, to symbolise the year when the killings started during World War I.

Turkey agrees that many Armenians died in the ethnic fighting and the deportation process that ensued between 1915 and 1917, putting its estimate at 300,000 casualties.

Armenia says 1.5 million died in what it calls a genocide, an accusation denied by Turkey. The centenary of the mass killings will be commemorated on Friday.

The Armenian Apostolic Church called on all Armenians on Thursday for the “prayerful participation in this historic event” at Echmiadzin, an austere 4th-century edifice, believed to be the Christian world’s oldest cathedral.

After the ceremony led by Catholicos of All Armenians, Karekin II, bells chimed in Armenian churches across the world and a minute of silence was observed.

On Friday, hundreds of thousands are expected to join a procession to a hilltop memorial in Yerevan carrying candles and flowers to lay at the eternal flame at the centre of a monument commemorating the deaths.

In Paris, Los Angeles and other cities, members of the Armenian diaspora – that came to existence as a result of the killings – will also hold commemorations.

Russian President Vladimir Putin and French President Francois Hollande are expected to be among a handful of world leaders to travel to Armenia for the commemorations, but others are shying away for fear of upsetting Ankara.

In the run-up to the ceremonies, Ankara condemned growing “racism” in Europe.

On Wednesday, Turkey recalled its ambassador to Vienna in protest against the Austrian parliament’s decision to call the massacre “genocide”.

Earlier this month Ankara also recalled its envoy to Vatican after Pope Francis described the killings as “the first genocide of the 20th century”. 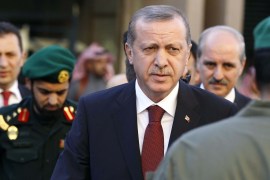 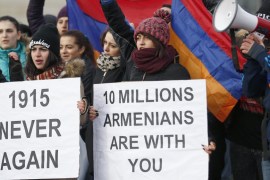 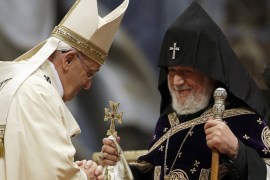 Turkish president warns pontiff not to repeat comments on 1915 killings, but US urges Ankara to admit “historical fact”. 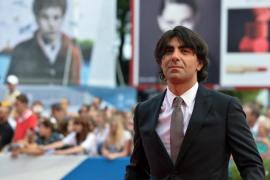