It is being described as one of the worst disaster of its kind.

At least 800 migrants trying to enter Europe drowned in the Mediterranean over the weekend when their overloaded boat capsized. Only 28 survived.

One survivor, whom we will call Jamal, a 16-year-old from Somalia, told Al Jazeera of the ordeal experienced at the hands of people smugglers in Libya, where the migrants set off to Europe.

“The problem we faced in Libya was mainly around the fact we had our money taken and we were beaten up very badly. Some individuals I know died of starvation. The trafficker didn’t allow us to speak to our families, we weren’t given any food and we were constantly beaten.

“One time, the trafficking ring was uncovered and the boss man blamed it on a woman who he beat severely, she then came back to us; she was crying,” Jamal said.

Jamal said the boat was so crowded that at one point he fell overboard and had to be dragged back in.

On Tuesday, the International Organization for Migration (IOM) warned that, based on current figures, the migrant death toll on the Mediterranean this year could top 30,000.

The IOM said it believed 1,727 migrants have died trying to make the journey to Europe from North Africa so far this year, compared to just 56 at the same time last year.

“IOM now fears that the 2014 total of 3,279 migrant deaths may be surpassed this year in a matter of weeks,” the group said in a statement.

The migrant boat’s captain and the ship’s mate are now facing charges of reckless multiple homicide. 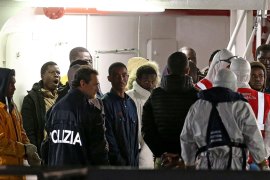 Italian prosecutors say captain and first mate of migrant vessel that capsized off Libya coast to face justice in Italy. 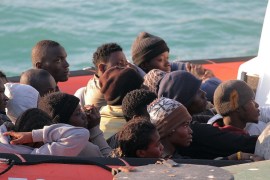 Italy’s coastguard rescued 144 from ship off Libya, but survivors tell Save the Children that hundreds were on board.