At least 46 people have been killed in the Yemeni capital after Saudi-led air strikes targeted a suspected weapons base held by Houthi fighters.

Health officials told Al Jazeera on Monday that more than 300 people were wounded when warplanes reportedly struck a Scud missile base in Faj Attan, a district in western Sanaa, that sparked a series of explosions.

Thick black smoke billowed into the sky as scores of nearby houses and vehicles were destroyed leaving the streets littered with debris.

“This was by far the strongest explosion witnessed in Sanaa so far. Hundreds, if not thousands of homes have been damaged, sending thousands of people to flee the area,” Hakim al-Masmari, the editor-in-chief of the Yemen Post, told Al Jazeera.

Residents said the explosions sent shockwaves across the city with civilians fleeing from their homes in the aftermath.

“It was like the doors of hell opened,” resident Mohammed Sarhan told the Associated Press news agency.

“I felt the house lift up and fall,” he said.

Iran’s Foreign Ministry said it was summoning Saudi Arabia’s envoy to Tehran after windows at its embassy were shattered by the blast.

Indonesia, whose embassy is nearby, also condemned the strikes.

“Several diplomatic staff were injured in the air strike. It also damaged the embassy building and all vehicles belonging to the embassy,” Foreign Minister Retno Marsudi said.

Riyadh Yassine, Yemen’s foreign minister, said Gulf countries would launch a large reconstruction project to rebuild the country after the conflict had ended.

The targeted base belonged to the missile brigade of the elite Republican Guard, an army unit which was loyal to former president Ali Abdullah Saleh who was forced to step down in 2012 after a wave of protests against his rule.

Army units loyal to Saleh have sided with the Houthis in a fight against the government of President Abd-Rabbu Mansour Hadi.

Al Jazeera’s Mohamed Vall, reporting from Jizan near the Yemen-Saudi border, said Riyadh may have targeted the base over fears that Houthi fighters could use scud missiles at the base to target the kingdom.

“The Saudis are afraid that if these missiles are taken near the border they will inflict damage there.”

“If modified they [scud missiles] can reach hundreds of kilometres in distance,” he said.

Saudi Arabia and other Sunni-ruled Gulf powers began the air campaign on March 26, hoping to roll back the Houthis who seized Sanaa in September and forced Hadi to flee the country.

The kingdom says the air strikes will continue until Hadi is reinstated and the Houthis surrender.

In the southern coastal city of Aden, fierce fighting was reported on Monday in the Sheikh Othman district as fighters loyal to Hadi battled Houthis continuing their push south.

Clashes also raged in the central city of Taiz, which is in lockdown with pitched street battles and casualties reported on both sides.

Meanwhile, the US said it was deploying the USS Theodore Roosevelt in the waters off Yemen to intercept any Iranian vessels carrying weapons to the Houthis.

Tehran has repeatedly denied claims of backing the Houthis, and has denounced the Saudi-led campaign as a “genocide” and “major crime.” 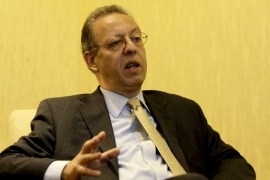