The foreign minister of the UN-recognised government of Libya has condemned the purported killing of 28 Ethiopian Christians shown in a video released by the Islamic State of Iraq and the Levant’s (ISIL) Libyan arm.

Muhammad Dayri called the killings “barbaric” at a meeting of African and Asian leaders in Indonesia’s capital, Jakarta, on Monday.

“This is not the first time that these hordes of ISIL operate with tragic and horrible actions in Libya,” Dayri said, referring to the earlier mass murder of 20 Egyptian Christians and a Ghanaian by the group in February 2015.

Members of ISIL released the video purporting to show the killing of 28 Ethiopian men on Sunday. The footage switched between the shooting of 16 men in a desert area, and another 12 being beheaded on a beach.

It was not immediately clear who the captives were or what they were doing in Libya.

Libya is a popular way-point for people from sub-Saharan Africa trying to make the journey across to Europe, and was home to a substantial population of African migrant workers prior to its civil war in 2011.

‘Misuse of a noble religion’

The European Union denounced the latest killings by ISIL as a “criminal” effort to create religious divisions.

“This not a clash of civilisations, this not a fight between Islam and the West,” an EU spokesman said in a statement. “This is a criminal misuse of a noble religion to perpetrate terrorist attacks in a struggle for power.”

The video bore the official logo of the ISIL media arm Al Furqan and resembled previous videos released by the group. A text on the screen identifies the men as “followers of the cross from the enemy Ethiopian Church”.

Dayri has asked the international community, particularly the UN, to supply his government with arms to “combat terrorism” in the country.

His Tobruk-based government is also fighting Libya’s legally-installed government based in the capital Tripoli. Both are conducting military operations against ISIL. 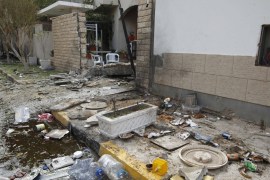 Two bombs exploded at the gate of the Iranian ambassador’s home in Tripoli, but there were no reports of casualties. 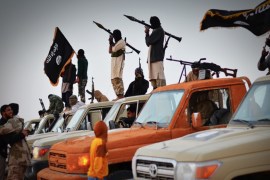