Saudi-led air strikes against Houthi fighters in Yemen have led to a virtual lockdown of the capital Sanaa, with residents fleeing for safety and many businesses shutting down.

Shopkeeper Rassam Ali told Al Jazeera that every day is a battle for survival for residents as the war rages on.

“There are very few people left here. Everyone has fled, and those who have stayed live alone without their families. So hardly anyone comes to buy anything anymore,” Ali said.

“Now I’m lucky if I make $20 a day. How can I pay my rent or even my electricity bills? If the situation stays like this then I’m sure I’ll be out of business within days.”

What makes things more difficult for Ali is that his shop is not far from the airport and a military air base – prime targets of the air strikes.

Even though food and other products are available, the average Yemeni can no longer afford to buy most things. Add to that the fact that many families are now displaced.

Many civilians have fled the capital since air strikes began a week ago.

“At the beginning they were targeting only Sanaa, so people were fleeing to the provinces. However, now they have expended to the suburbs as well,” Hakim al-Masmari, editor-in-chief of Yemen Post, told Al Jazeera.

He said Sanaa has enough food supplies so far, but the city is facing a shortage of petrol.

In the southern city of Aden, where intense clashes are taking place, many residents are trapped in their homes, facing shortage of water, food and power.

Houthis fighters took over the central Crater neighbourhood in the city on Thursday, as well as a presidential residence.

Ahmed Shammakh, a Yemeni economist, said that the conflict is plunging the country – already one of the poorest in the Middle East – deeper into poverty.

“There’s no doubt that this war has gravely affected Yemenis,” Shammakh said. “Even though food and other products are available, the average Yemeni can no longer afford to buy most things. Add to that the fact that many families are now displaced. It’s making poverty and unemployment rise drastically.”

In Yemen, almost one million children under the age of five are malnourished and the World Food Programme says about 13 million Yemenis depend on polluted or dirty water for drinking.

On Thursday, Human Rights Watch, an international rights group, called on all sides in Yemen’s conflict to avoid harming civilians, after air strikes hit a displaced persons’ camp in northern Yemen on March 30. The attack killed at least 29 civilians.

“The deaths of so many civilians in a camp with no apparent military target heightens concerns about laws-of-war violations,” said Joe Stork, deputy Middle East and North Africa director at Human Rights Watch. “All sides in Yemen’s conflict need to do what they can to avoid harming civilians.”

Amid air strikes and ground battles between Houthis, their allies and loyalists of President Abd-Rabbu Mansour Hadi, relief agencies are struggling to meet the humanitarian needs of civilians caught in the crossfire.

“There have been air strikes in the north, west and south, and clashes between opposing Yemeni armed groups in the centre and south, that are putting immense strain on already weak medical services,” Cedric Schweizer, an aid worker in Yemen with the International Committee of the Red Cross (ICRC), said in a statement.

The Saudi-led Arab coalition launched air strikes on Houthi positions on March 26, after the rebels closed in on the coastal city of Aden, where Hadi had been based after fleeing Sanaa. 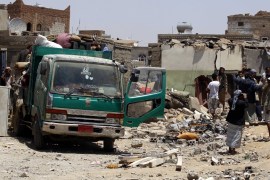