Wars without well-defined strategic goals tend to result in tribulation and suffering as opposed to solving political conflicts. Saudi Arabia’s King Salman has outlined the broader political objectives of his coalition military operation in Yemen, Decisive Storm, which include ending the Houthis’ military control of Yemeni cities and returning the legitimate president, Abd-Rabbu Mansour Hadi, and his government to power in Sanaa.

To this end, the Decisive Storm operation has conducted more than six continuous days of heavy air strikes targeting key military camps and administrative areas in several parts of the country under the control of Houthis and former President Ali Abdullah Saleh loyalists.

The military operation has also heavily targeted the headquarters of the Houthis’ leader, Abdel-Malik al-Houthi, in the area of Maran in Saada province, the stronghold of Houthis.

RELATED: ‘I hope we do not turn into another Syria’

Although aggressive Saudi-led air strikes have succeeded – so far – in halting Houthis’ advancement, they have not yet weakened the Houthis to an extent that they will stop fighting and accept the political demands of King Salman and President Hadi.

It is clear, however, that these air strikes have caused significant damage to Yemen’s already crumbling infrastructure, including airports, military air bases, roads, military facilities and camps, and overall military capabilities and weaponry systems, particularly the country’s anti-aircraft defence systems.

Although al-Qaeda in Yemen is currently downplaying its political response to the Saudi-led military operation because it is targeting a common enemy, the Houthis, they will likely attempt to exploit the destruction of Yemen’s military forces in the future.

Thus, Saudi Arabia, and its allies, must develop and rapidly implement plans to restore modern and effective Yemeni armed forces at the conclusion of their military operations in order to protect the territorial integrity and sovereignty of the country.

In addition to the widespread destruction, there has also been a substantial humanitarian cost in this military operation. Many supporters of the Saudi-led coalition are concerned about the number of civilian deaths resulting from the ongoing military air strikes.

Yemenis are confused by the sudden and unexpected turn of events in their country and wonder whether the Arab coalition that is causing such destruction in their country will ultimately save them.

OPINION: What they won’t admit at the Arab summit

Yemeni social media and local media outlets have circulated heartbreaking images of civilian victims, including women and children, who were burned to death in air strikes near Sanaa International Airport, at a refugee camp near Saada, and in the town of Yarim in Ibb province.

At least 93 civilians were reported to have been killed since March 27 and a further 364 injured in Sanaa, Sada, Dhale, Hudayda and Lahj, among whom were “dozens” killed in an air strike on the al-Mazraq camp for internally displaced persons that was established by the UN in 2009.

At least another 35 were injured in the raid, including 11 children.

The number of civilian casualties is greater in the south as a result of direct military clashes between pro-Hadi tribal and militia forces backed by the Saudi-led coalition and Houthi rebels supported by Saleh loyalists in the Yemeni army.

Moreover, media reports that the Saleh-Houthis alliance has intentionally provoked battles in civilian areas will further complicate the Saudi military mission by increasing the potential for civilian casualties.

In the south, the war has been intensified by Saleh’s recent failure to take Aden by force and his anticipated determination to make another attempt in partnership with the Houthis will significantly increase civilian suffering in this part of the country.

King Salman has yet to directly address the Yemeni people and explain the political goals of his country’s operation in order to win the hearts and minds of the Yemenis.

A Saudi offer of financial compensation for victims’ families and medical treatment for the wounded could represent an important first steps towards gaining the support of the Yemeni people. But no amount of compensation can heal the unseen wounds of this war-torn nation.

Even before the start of the Decisive Storm operation, the humanitarian situation in Yemen was of grave concern to many international humanitarian organisations, including OXFAM, which warned that more than six out of every ten Yemenis are without adequate food, clean water and access to basic services – including approximately a million children who are suffering from extreme malnutrition.

Thus, international humanitarian aid to Yemen is critical at this juncture. Yemenis have long viewed the Gulf Cooperation Council (GCC) as a symbol of hope for a new Yemen in which they can find jobs and pursue their personal dreams.

They hope that one day Yemen will be admitted to this very wealthy club. Although the GCC has finally decided to help them, the Yemenis are receiving bombs and fires but no hope. 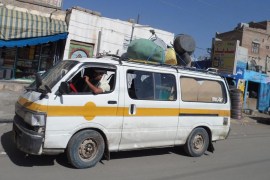