The United Nations launched an appeal for almost $275m to aid 7.5 million people in Yemen over the next three months, as fighting intensifies in the south and air strikes continue in 18 of the country’s 22 provinces.

About 150,000 people have been displaced, 50 percent more than the previous UN estimate, the UN humanitarian agency OCHA said on Friday, citing local sources.

The agency said health facilities had reported 767 deaths from March 19 to April 13, almost certainly an underestimate.

“Thousands of families have now fled their homes as a result of the fighting and air strikes,” the UN humanitarian coordinator for Yemen, Johannes Van Der Klaauw, said in a statement. “Ordinary families are struggling to access health care, water, food and fuel – basic requirements for their survival.”

“Public water services covering 1 million people are at serious risk of collapse,” the UN appeal document said. “Hospitals are overwhelmed with casualties, including people who have been direct victims of violence and those suffering severe burns from explosions.”

Even before the current conflict, Yemen was in a large-scale humanitarian crisis, with 15.9 million people – 61 percent of the population – estimated to require some kind of humanitarian aid.

The UN calculates it needs $273.7m to provide what Yemen needs. The largest part – $144.5m – aims to ensure food security for 2.6 million people. Yemen already had 10.5 million people classed as “food insecure” in December 2014. That number has now risen to 12 million and is expected to rise further as the fighting continues.

An estimated 100,000 tonnes of food are needed each month, but current World Food Programme stocks are limited to 37,000 tonnes, the appeal document said.

“Humanitarian food stocks in-country are insufficient to meet growing needs and the dramatic decline in commercial imports is threatening the wider food supply,” it said. “Farmers are missing an entire cropping cycle, which will further reduce food availability.”

Iran has proposed a peace plan for Yemen that calls for a ceasefire followed by foreign-mediated talks by all sides.

“Mr Zarif referred to the Iranian four-point plan to end the crisis in Yemen, stressing the importance of an immediate dialogue between the Yemenis and said Iran was ready to help resolve this crisis,” IRNA said.

Ban called Thursday for an immediate ceasefire in Yemen, where a Saudi-led coalition is bombing Houthi Shia rebels fighting forces loyal to President Abedrabbo Mansour Hadi, who has fled to Saudi Arabia. 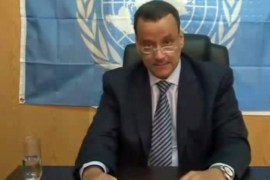 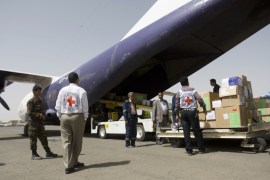 Houthi rebels fire motor round at Najran border in Saudi Arabia, as fighting intensifies in Aden and Yemeni capital.