At least 10 people have been killed according to a monitoring network after Syrian government forces shelled the southeastern suburbs of Damascus, an area that has come under intensive assault by regime jets and artillery in recent days.

A main roundabout in the town of Zabdean was shelled on Thursday, in which at least 10 people, including five children, were killed and nearby homes destroyed, the Syrian Observatory for Human Rights reported.

In another suburb of the Syrian capital – Eastern Ghouta – clashes have intensified between government forces and opposition fighters, leaving several people injured.

Eastern Ghouta has been shelled intensively for the past 10 days, with reports of at least 36 surface-to-surface missiles and dozens of other mortars being used.

Al Jazeera’s Mohamed Jamjoom, reporting from Beirut in neighbouring Lebanon, said there has been an uptick in violence over the past several weeks, especially in Idlib province.

“The city of Idlib became the second provincial capital to fall to the rebels. This was a group coalition which was led by al-Nusra Front. The city fell in the last part of March.

“In the intervening time, there has really been an upswing in the ongoing aerial bombardment by Syrian forces. It is getting bloodier and bloodier by the hour,” he said.

Meanwhile, in Yarmouk, south of Damascus, clashes have escalated between government forces and the Islamic State of Iraq and the Levant (ISIL) group, while government forces shelled the neighbourhoods of the area.

The Syrian Observatory has documented 1,709 air strikes by government warplanes and helicopters across Syria since the beginning of April 2015.

At least 984 barrel bombs were dropped from helicopters on the same cities mentioned above in addition to Raqqa, the report said.

The death toll from air strikes has risen to 260 civilians since the beginning of April, which includes 81 children while 1,500 others were injured, the Syrian Observatory said.

Thousands have been displaced due to the attacks and many homes have been damaged or completely destroyed.

In Idlib alone, the Syrian Observatory documented 123 air strikes in the past 36 hours.

At least 38 people have been killed during those air strikes while dozens of others were injured.

The fighting in Syria, which began in 2011, has now killed more than 200,000 people, while nine million have been forced from their homes, according to UN data.

The Syrian Observatory released on Thursday a toll of almost 310,000 Syrians killed since the start of the conflict. 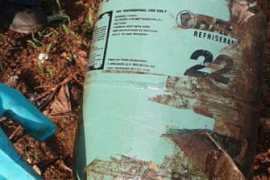 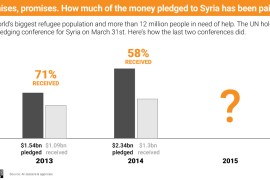