A Ukrainian journalist known for his pro-Russian views was gunned down in broad daylight in Kiev a day after a pro-Russian lawmaker was found dead, local police said.

Oles Buzyna, 45, who worked as editor-in-chief of a leading daily until March, was killed early Thursday afternoon by two masked men shooting from a passing car, the Ukrainian interior ministry said in a statement.

Buzyna, who ran for a seat in parliament on the Russian Bloc ticket in 2012 and was known for his pro-Russian views, was largely perceived as more of an activist than a journalist.

He had a three-month stint as the editor-in-chief of Segodnya, a newspaper owned by Ukraine’s Russia-leaning richest man, before he resigned in March citing pressure for censorship.

The killing follows another high-profile murder on Wednesday. Oleh Kalashnikov, a lawmaker from ex-President Viktor Yanukovich’s party, was found dead on the landing of his home in Kiev with a gunshot wound.

Police would not immediately say whether he was murdered or killed himself.

Anton Herashchenko, an adviser to the interior minister, said in a Facebook post that Buzyna, like Kalashnikov, was a key witness in a criminal case related to pro-Russian activists who in early 2014 attacked the pro-Western protests on Kiev’s main square.

The protests eventually led to the ouster of the Kremlin-friendly Yanukovich, who fled the country in
February last year.

Herashchenko called on all witnesses in the case or anyone who might have information about it to contact the police if they fear for their safety.

The minister said the killings “could be” orchestrated by Russia in order to “destabilise the situation in Ukraine from within”. 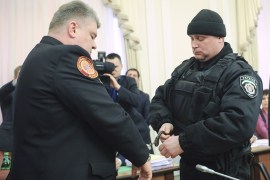 Emergency services chief and his deputy accused of embezzling state funds and of illegal links to off-shore companies. 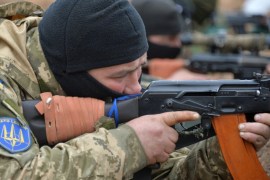 Fighting flares up in Ukraine amid shaky truce