Forces loyal to Libya’s internationally recognised government have carried out air strikes near the capital Tripoli, which is controlled by a rival administration, officials said, as UN-sponsored peace talks were due to start in Morocco.

Mohamed El Hejazi, spokesman for army forces loyal to the government of Prime Minister Abdullah al-Thinni based in Tobruk, said war planes had attacked Tripoli’s Mitiga airport and other targets in western Libya.

“This is part of our campaign against terrorism,” he said.

Abdulsalam Buamoud, a spokesman for Mitiga airport, said the planes had missed the airport, but a security source said a missile battery some 10km from the airport on the outskirts of Tripoli had been hit.

Wednesday’s air strikes came after the military chief of Thinni’s government expressed doubt about UN-backed talks in Morocco aimed at ending the country’s political split and said that he was “betting on a military solution” if a deal remains elusive.

We are betting on a military solution

agreement between rival governments in Libya.

Haftar, who commands forces loyal to the Tobruk-based government, separately told the Associated Press news agency that he does not oppose negotiations outright.

He said he would abide by decisions of his government, but said it was not clear how the political rivals could reach a deal.

He would not agree to any ceasefire with armed groups, he said.

Haftar said he believes his forces could win such a battle even though they currently control only a small area of Libya and no major cities.

The international community is pushing for a deal, fearing Libya’s chaos could destabilise its neighbours.

Hafter warned last month that fighters of the Islamic State of Iraq and the Levant (ISIL) in Libya would inflitrate Europe if the West failed to support Libyan forces with arms and ammunition.

Libya effectively split in half last year when forces allied to Haftar attempted to drive rival militias out of Tripoli and were defeated, leaving the country’s internationally recognised government and elected parliament confined to the eastern cities of Tobruk and Bayda.

The rival government, led by the Libya Dawn coalition, controls the capital Tripoli.

The two sides have been negotiating in Morocco to end months of fighting, the bloodiest since the 2011 overthrow of Muammar Gaddafi.

Bernadino Leon, the UN envoy, has visited both sides in Tripoli and Tobruk, where he has proposed keeping Libya’s elected parliament and setting up a unity government of independents.

A new round of talks is due to begin on Wednesday. 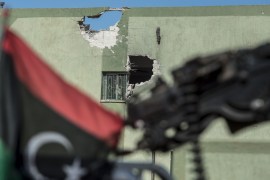