Iran has said it will use all its influence to broker a peace deal for Yemen in order to end Saudi-led air strikes against the Houthi rebels.

“We are a major force in the region and we have relations with all groups in various countries, and we are going to use that in order to bring everybody to the negotiating table, to the point that we can,” Mohammed Javad Zarif, Iran’s foreign minister, said on Wednesday.

Zarif, who was visiting Portugal, said efforts to bring peace to Yemen must “start with the right premise, that we need to end this bombardment and all the bloodshed, and prevent al-Qaeda from taking advantage of this nasty situation”.

“We have influence with a lot of groups in Yemen, not just the Houthis and the Shias,” he said.

Zarif’s comments came a day after the UN Security Council passed a resolution imposing an arms embargo on the Shia rebels, the second to be passed this year.

The resolution, put forward by Jordan and Gulf Arab countries, also requires the rebels, known as Houthis, to withraw from places they control, including the capital Yemen.

Zarif said that Iran had already consulted with Turkey and Pakistan, two majority-Sunni allies of Saudi Arabia, and Oman, the Gulf country that maintains the closest ties with Iran. None has joined the Saudi-led air campaign against the Houthis.

On Tuesday, Zarif had outlined a four-point peace plan comprising a ceasefire, humanitarian assistance, an intra-Yemeni dialogue and the establishment of a broad-based government.

Zarif urged an end to what he called “an aerial bombardment against the people of Yemen”, saying there were “hardly any military targets in Yemen”.

Meanwhile, street battles and air raids are driving more and more Yemenis from their homes, the United Nations said on Tuesday.

The UN Office for the Coordination of Humanitarian Affairs said estimates show that more than 121,000 people have been displaced inside Yemen since a Saudi-led coalition air strike campaign began on March 26, with nearly half that number concentrated in the country’s northwest.

“Humanitarian partners are providing assistance, including water, sanitation and health services, but the response is constrained by continued high insecurity due to airstrikes and fighting on the ground,” spokesman Jens Laerke, a UN spokesman, said.

Fighting continued on Wednesday, with tribal forces loyal to Hadi’s recognised government advancing on a military base held by supporters of former President Ali Abdullah Saleh outside the central city of Marib. The fall of the base would clear a path to the rebel-held capital.

Saleh’s supporters are fighting alongside the Houthi rebels. 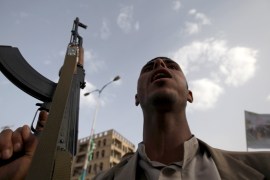 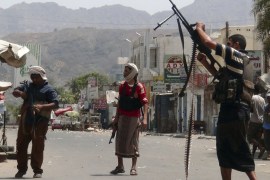