A weekend of heavy rain extending from Syria to Israel has caused widespread disruption across parts of the Middle East. Low-lying areas of the Gaza Strip have been left under water and the downpours were violent enough to force the closure of a major road near the Dead Sea.

The rain was fizzling out on Monday as it made its way towards the Caspian Sea. There will be a few showers over the next few days, but they will become fewer and further between.

The heaviest rain fell in Syria with 106mm of rain being reported on Saturday at Bassel al-Assad International Airport in the principal port city of Latakia. The past four days have seen 126mm of rain. That amounts to more than three times the April average of 38mm.

Lebanon and Jordan also reported heavy downpours at times along with the Gaza Strip. Two streets in Gaza City were flooded, and the Civil Defence was called in to help move a number of cars that were left stranded by the high waters inside the city and the northern Gaza Strip.

Meanwhile, the low-lying areas of Khazaa east of Khan Younis and Beit Hanoun were also swamped by the stormy conditions.

Israel too, was badly affected and parts of Route 90 were closed to traffic as streams that run off into the Dead Sea flooded the road.

In the north of the country, snow over the Golan Heights reached 20cm at the Mount Hermon ski resort by the end of the weekend.

Elsewhere, hail showers left a covering of ice across parts of Jerusalem.

The inclement weather came as quite a shock to many in the city. Temperatures were up around 38 Celsius by the middle of last week, which is 16 degrees above average. This weekend saw those temperatures struggling to reach highs of just 16C. 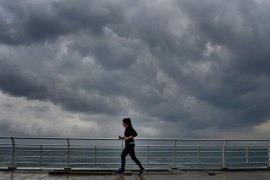 Winter storm set to hit the Levant and Middle East

A bout of winter weather set to bring rain, snow and gusty winds across the region. 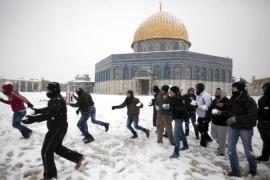 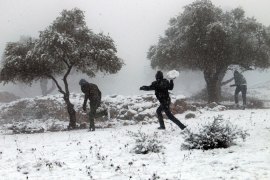 The eastern Mediterranean has been hit by one of the most severe winter storms in many years. 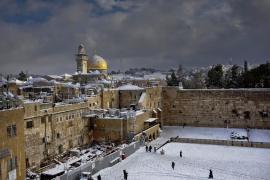 Snowstorm in the Levant

Army called out to help stranded motorists in Jerusalem as the city is paralysed by heavy snowfall.