Just a quarter of the $3.5bn in aid pledged to rebuild Gaza in the wake of last summer’s devastating war has been delivered, according to a new report.

The report from the Association of International Development Agencies, released on Monday, found that only 26.8 percent ($945m) of the money pledged by donors at the Cairo conference six months ago has been released, and reconstruction and recovery have barely started in the besieged coastal enclave.

“The promising speeches at the donor conference have turned into empty words,” said Winnie Byanyima, executive director of Oxfam, which was among the report’s signatories.

“There has been little rebuilding, no permanent ceasefire agreement and no plan to end the blockade. The international community is walking with eyes wide open into the next avoidable conflict, by upholding the status quo they themselves said must change.”

Operation Protective Edge, the 2014 Israeli assault on Gaza that spanned nearly two months, resulted in the deaths of 2,132 Palestinians and 71 Israelis, according to data from aid agencies.

More than 10,000 homes were destroyed in the war, and thousands more were severely damaged. An estimated 17,500 families remain homeless.

After Israel and armed Palestinian groups agreed on a ceasefire, international donors met in Cairo in October 2014, where more than $5bn in aid was pledged. Of this, $3.5bn was earmarked for Gaza, while the rest was intended to provide support for the Palestinian government in general, including programmes in the West Bank.

The report notes that while some damaged buildings in Gaza have been repaired, almost no large-scale reconstruction projects have started, and no permanent housing has been rebuilt.

Some international donors have been hesitant to disburse their reconstruction pledges due to the tense relationship between Hamas and the Palestinian Authority, who have bickered over control of Gaza’s border crossings. The plethora of other crises in the region, which also require donor attention, has further stalled the delivery of aid, the report noted.

“The paradox is that the lack of reconstruction is exacerbating the potential for conflict,” the report stated. “By refraining from releasing funds due to fear of political instability in Gaza, donors are entrenching divides that heighten instability.”

The report contains a number of recommendations, including for all parties to immediately resume negotiations for a long-term ceasefire, for donors to make good on their Cairo conference pledges, and for Israel to lift its ongoing blockade of the Gaza Strip.

Fikr Shalltoot – the Gaza director of Medical Aid for Palestinians, which was among the 46 signatories to the report – noted that the situation on the ground in Gaza has become dire.

“The people who lost their houses are losing their privacy, their dignity and their patience… The fear of the future has become a dominant feeling for the majority of people in Gaza,” she told Al Jazeera.

Mouin Rabbani, a Middle East analyst who specialises in the Israel-Palestine conflict, said that absent international aid, the Gaza Strip will remain unable to provide for the basic needs of its residents.

“Israel, the West, Egypt and the Palestinian Authority have transformed the Gaza Strip into an isolated, blockaded and entirely aid-dependent territory,” Rabbani told Al Jazeera, noting the ongoing siege of Gaza is of graver concern than the failure of donors to deliver promised aid.

“The Gaza Strip is in urgent need of both humanitarian and reconstruction assistance, but it is important to recall that this remains a fundamentally political rather than developmental challenge,” he said.

“As such, the most urgent Palestinian priority has been, and remains, national reconciliation and the reconstruction of a coherent, dynamic, credible and effective national movement.” 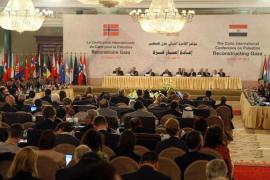 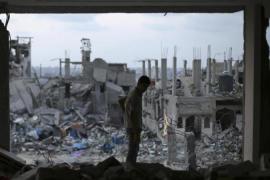 UN will monitor use of reconstruction materials in deal reached between Palestinian Authority and Israel. 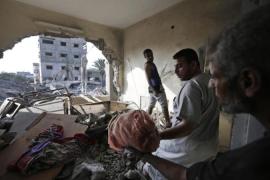