The first two planeloads of medical aid for Yemen have landed in the capital Sanaa after weeks of ongoing fighting, which the United Nations warned is pushing the country towards a humanitarian crisis.

The International Committee of the Red Cross (ICRC) and the UN Children’s Fund (UNICEF) said they finally landed two planes in Sanaa on Friday, carrying more than 30 tonnes of medical equipment, after days of delay.

Cedric Schweizer, head of the Red Cross delegation, told Al Jazeera that his organisation had been given security guarantees to distribute the aid around the country.

Schweizer said a surgical team had also arrived in the southern city of Aden, arriving at night by boat.

In a separate interview with Al Jazeera from Sanaa, Marie-Claire Feghali, a spokeswoman, said a second Red Cross plane carrying 32 tonnes of medical and humanitarian supplies is expected on Saturday.

Feghali said that the distribution of the medical supplies will also start on Saturday.

“The situation is not easy for the health workers and doctors,” she said, adding that at least three medical volunteers were killed in recent days while trying to retrieve those who were injured.

She also reported that in one hospital all ambulances were stolen, making it difficult to transport patients.

Meanwhile, Julien Harneis, a representative of UNICEF in Yemen, told Al Jazeera that he expects an “upsurge in malnutrition across the country” in the coming weeks.

“It was already a country where sixty percent of the country was living under the poverty line, that’s not going to get any better,” he said.

Yemen has only modest oil resources next to Libya and Iraq, and a very weak national government compared to pre-crisis Syria, meaning the state could offer barely any support to a population facing crisis.

UN Humanitarian Coordinator for Yemen Johannes van der Klauwe said 16 million people, nearly two thirds of the population, needed humanitarian assistance before the start of the crisis, which he said was now affecting 15 out of Yemen’s 22 governorates.

“The basic services which were already threadbare are now at risk of collapsing … What we are experiencing now is unprecedented in the modern history of the country,” he said.

“The humanitarian situation in Yemen is getting worse by the hour.”

As the Saudi-led coalition continues to target Houthi rebels for the sixteenth day on Friday, Al Jazeera has learned hat at least 13 Houthi fighters were killed in Shabwa.

The Defence Ministry in Sana’a was also hit on Friday, but there was no immediate report of casualties.

Despite the continuing air strikes, thousands of Houthi supporters marched across the city to denounce the Saudi-led coalition air strikes.

Many countries have been airlifting their nationals out of Yemen, or sending boats to pick them up.

Yemenis trapped by the conflict have fewer options, leading some to risk the perilous Red Sea crossing to Djibouti and Somaliland.

The UN refugee agency UNHCR said around 900 refugees fled by boat in the last 10 days to countries in the Horn of Africa. 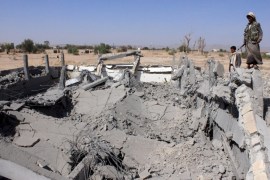 Ban Ki-moon says the world does not need more chaos like in Libya and Syria. 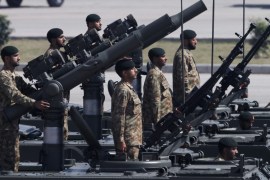 Vote indicates country will not join Saudi-led military coalition but will “stand shoulder to shoulder” with kingdom.