“A few weeks earlier, some young boys from our village were arrested for allegedly throwing stones,” Sheikh told Al Jazeera. “They all came home the next morning after their parents paid a small fine.”

Accused of throwing stones, Khaled was arrested near the Israeli separation wall in Beit Anan, a village near Sheikh in the occupied West Bank. Yet, upon arriving at the police station at the Binyamina settlement where the boy was being held, Hussam learned that his son would not be allowed to go home with him anytime soon.

“When we got to the police station, he had been beaten up and there was blood on his face,” Sheikh told Al Jazeera. “After five court hearings, he was sentenced to four months in prison. How does a 50-year-old man sit on a bench and decide the fate of little children?”

The Israeli military court that sentenced Khaled also fined his parents 2,000 Israeli shekels ($510) – a costly amount on top of the lawyer and court fees the Sheikh family already had to pay.

Palestinians tried in Israeli military courts are convicted at a rate of more than 99 percent, according to a 2011 military document leaked to the Israeli daily Haaretz.

“Why is this necessary?” Sheikh asked. “Can you seriously tell me that these kids throwing stones at a concrete wall pose a threat to their state? Or to their soldiers in armoured jeeps?”

Ill-treatment of Palestinian children in the Israeli military detention system is widespread and systematic, as nearly three out of four kids experience some form of physical violence during arrest, transfer or interrogation

Israeli, Palestinian and international rights groups have decried Israel’s practise of arresting Palestinian children. According to a recent report by Military Court Watch, a group that monitors Israel’s detention of children, 182 of the more than 5,600 Palestinians detained in Israeli jails were children as of the end of February.

The Palestine Liberation Organisation (PLO) announced in a December report that in 2014, Israel detained 1,266 Palestinian children below the age of 15 in the occupied West Bank, including East Jerusalem. Since 2000, the report added, more than 10,000 Palestinian children have been detained by Israeli forces.

Israel recently prompted widespread criticism for its 45-day imprisonment of Malak al-Khatib, a 14-year-old girl who returned home in the central West Bank village of Beitin on February 13. Like Khaled al-Sheikh, she had been accused of throwing stones, and was prosecuted in an Israeli military court.

Brad Parker, an attorney and international advocacy officer for Defence for Children International – Palestine Section (DCI-Palestine), said that Khatib and Sheikh were among the more than 700 Palestinian children sentenced in Israeli military courts every year.

“Ill treatment of Palestinian children in the Israeli military detention system is widespread and systematic, as nearly three out of four kids experience some form of physical violence during arrest, transfer or interrogation,” Parker told Al Jazeera, citing DCI-Palestine’s statistics.

In most cases, Parker added, parents are not notified of their children’s arrest for 24 to 48 hours, and the children do not see their parents or a lawyer until they stand before a judge in an Israeli military court. “Despite the fact that international law and international juvenile justice standards include a prohibition on compelling a person from testifying against themselves or confessing guilt, this is commonplace in the Israeli military detention system,” he continued.

Yet, in more than one-quarter of juvenile arrests of Palestinians in 2014, children were coerced into signing confessions in Hebrew, despite the fact that most do not speak the language, a recent DCI-Palestine report noted.

An Israeli military spokesperson did not reply to Al Jazeera’s multiple requests for comment on these allegations.

According to a study published last month by UNICEF, the United Nations programme focusing on children, Palestinian children are regularly subjected to verbal abuse and intimidation, strip-searched and not “adequately notified of their legal rights, in particular the right to counsel and the right to remain silent”.

In November 2014, ministers in Israeli Prime Minister Benjamin Netanyahu’s government threw their weight behind a bill that could impose sentences of up to 20 years in prison for Palestinians in East Jerusalem who throw rocks at Israeli vehicles. “Israel is acting firmly against terrorists, rock-throwers, against firebomb throwers and against those who use fireworks,” Netanyahu said at the time.

“A terrorist is a terrorist,” then-Justice Minister Tzipi Livni, considered a centre-left politician, declared. “It makes no difference what weapon he uses.”

Though the bill has yet to pass in the Knesset, Israel’s parliament, human rights groups say it will disproportionately affect Palestinian children, who are involved in the majority of stone-throwing cases.

“We know that most children are arrested for participation in demonstrations or throwing stones, so this new legislation can be seen as directly targeting children and youth,” said Randa Kamal, an advocacy officer for Addameer, a Ramallah-based group that monitors Israel’s arrests of Palestinians.

Meanwhile, back in their West Bank home, the Sheikh family is worried for Khaled’s health. He suffers from anaemia, a blood condition that requires him to take medicine three times a day – but Sheikh said he has not been able to speak to his son since his arrest.

“He looked very ill when we saw him in court,” he recalled. “We have no way of knowing whether he has been given the medicine and treatment that he needs. We are very worried about his health.” 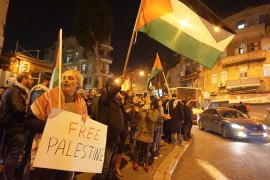 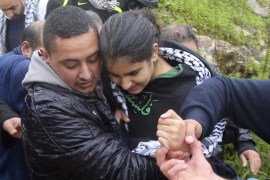 Malak Khatib was the youngest Palestinian female to be held by Israel. 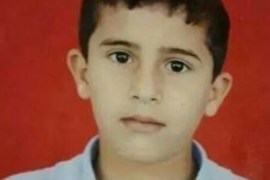 Thirteen-year-old boy shot three times in the chest during riot in village of Beit Liqya in the occupied West Bank.