Ukraine has honoured victims of a coal mine accident with a minute of silence all over the war-torn country on a day of mourning announced by Ukrainian President Petro Poroshenko.

The death toll reached from the gas explosion which rocked the Zasyadko mine before dawn on Wednesday has now reached 32, according to officials in a rebel-held city of Donetsk where the explosion took place.

The Donetsk People’s Republic group that controls the city said in a statement that a rescue operation was still underway and the number of dead could increase.

The rebel authorities have been accused by Ukraine’s government of failing to do enough to save the lives of the miners.

The blast occurred as 230 workers were in the mine, of whom about 200 were quickly evacuated, but uncertainty lingered throughout the day regarding the fate of the others.

Igor Murygin, a 42-year-old miner being treated for burns at a hospital in Donetsk, said he was blown off his feet by the explosion.

“When I came to, there was dust everywhere. People were groaning,” said Murygin, who suffered burns over 20 percent of his body.

The mine had recently installed new equipment and nothing appeared to be out of order, he added.

Speaking in Kiev, Ukrainian Prime Minister Arseniy Yatsenyuk accused rebels of preventing a team of 60 Ukrainian rescuers from reaching the mine to provide assistance.

“If we truly need assistance, we will turn to Russia,” Pushilin was quoted as saying by the rebel-run Donetsk News Agency.

The mine has a history of deadly accidents, including one in November 2007 that killed 101 workers, and two more the following month that killed a total of 57.

Workers complained about many safety violations at the site.

“We work like crazy for peanuts. We want this place to be safe. We want our children to be able to work here,” said a miner who only gave his first name, Kostya.

Safety officials say 99 people were killed in Ukraine’s coal mines in 2014, with 13 of those deaths directly attributable to the fighting in the east, where mines have frequently been hit in artillery duels. 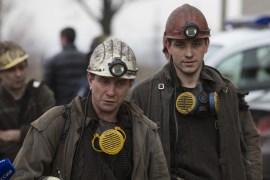 Kiev accuses pro-Russia separatists of delaying rescue efforts at the Zasyadko mine in rebel-held city of Donetsk.