India has banned the broadcasting of a controversial documentary in which one of the men convicted for gang-raping and murdering a female student is shown blaming the victim mainly because of her gender – a move the film’s maker called “arbitrary censorship”.

Home Minister Rajnath Singh told parliament on Wednesday the comments of Mukesh Singh, one of five men convicted over the 2012 attack in New Delhi, were “highly derogatory and an affront to the dignity of women”.

“The government condemns it,” he said of the documentary made by award-winning British film-maker Leslee Udwin, who won rare access to New Delhi’s Tihar jail to interview the prisoner on death row.

“It will not allow any organisation to leverage such an incident and use it for commercial purpose,” he said.

The December 2012 gang-rape of the young physiotherapy student as she travelled home from a visit to the cinema triggered violent protests in India. The woman died from her injuries 13 days after the savage attack, which highlighted the frightening level of violence against women in the world’s second-most populous country.

It led to a major reform of India’s rape laws, speeding up trials and increasing penalties, although many campaigners say little has changed for most ordinary victims.

India’s NDTV network was due to have shown the documentary to mark International Women’s Day on Sunday, when it will also be broadcast in six other countries including Britain.

‘Banning is not the answer’

Udwin said she was heart-broken by the ban on her documentary, in which Mukesh Singh said the 23-year-old victim should not have been “roam(ing) around at 9 o’clock at night” and that “a girl is far more responsible for rape than a boy”.

“I am sure, positive, that NDTV will fight this arbitrary censorship all the way, because it is an organisation that stands up for values, for public welfare and for the greater good,” she told the AFP news agency.

“India is a country that values its rights and one of the most important of them is the freedom of speech, expression and that needs to be upheld.”

Udwin said earlier she had permission from both prison authorities and the home ministry to film inside the vast Tihar jail in Delhi for her documentary.

But Home Minister Singh said she had violated the terms of the agreement, and summoned the head of the jail to explain why permission had been granted.

The ban sparked a lively debate on social media and in parliament, where independent MP Anu Agha said India was failing to confront the problem of violence against women.

“Banning this movie is not the answer,” she said.

“We have to confront the issue that men in India do not respect women and any time there is a rape, blame is put on the woman.” 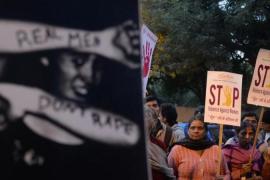 Sentences suspended for two of four men after they file appeal against death sentence for raping New Delhi student.