Thirty-three miners are dead or unaccounted for after an explosion at a coal mine in the rebel-held city of Donetsk in eastern Ukraine.

The blast took place at Zasyadko mine, near the city’s war-wrecked airport early on Wednesday.

According to Kiev-backed officials of Donetsk who have relocated to Mariupol since the city fell into rebel hands, 230 miners were on shift, of whom 198 escaped the blast.

The remaining 32 were killed, along with one miner who died from injuries after escaping from the mine, the officials said.

However, rebels of the self-declared People’s Republic of Donetsk said 23 people had died and 10 were unaccounted for.

The chairman of Ukraine’s parliament, Volodymyr Groysman, called the explosion a “terrible tragedy” and called on lawmakers to observe a minute’s silence.

Mine officials said the explosion was most likely caused by gas and not linked to fighting at the nearby frontline in the war between pro-Moscow rebels and Ukraine government forces.

Nevertheless, Kiev suggested the war had made the disaster worse, accusing the separatists of holding up a rescue effort by restricting access.

Ukrainian Prime Minister Arseniy Yatsenyuk said rescue workers had been dispatched by the central authorities, “but the Russian terrorists did not let them reach the scene of the accident”, he said, using a term commonly used by Kiev to describe the separatists.

Separatist authorities in Donetsk said in a statement that the blast occurred at a depth of more than 1,000 metres.

The statement said the explosion was caused by a mixture of gas and air – a common cause of industrial mining accidents.

The Zasyadko mine was the site of another accident in 2007 when more than 100 miners were killed in a methane explosion. 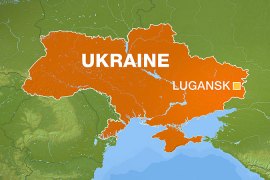 At least 16 miners killed and nine others unaccounted for following explosion in eastern Lugansk region. 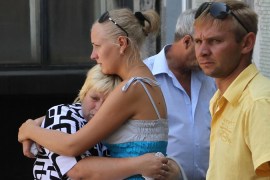 Thirty-two miners killed in two separate incidents, as president calls for a national day of mourning.