The official report into the police killing of 34 South African miners in 2012 has been submitted to the office of President Jacob Zuma, with rights groups demanding that its findings are published immediately.

The president’s office said on Tuesday that Zuma, who is currently on a state visit to Algeria, would prioritise the consideration of the report on his return.

Earlier in the day, Phuti Setati, secretary of the Marikana Commission that published the report, said he had no influence over when or whether the Farlam report would be published.

The shooting at Marikana, a town outside Rustenburg in the North West province in South Africa, was the worst violence witnessed in the country since the advent of democracy in 1994.

Evidence presented at the inquiry tarnished police claims that they acted in self-defence when they gunned down the striking miners.

In the days before, 10 other people were killed in other violence around the platinum mine – including non-striking miners, security guards and two police officers who were hacked to death.

Lawyers for the dead miners’ families blamed the killings on a bout of police revenge, and accused officers of a cover-up.

The Marikana Commission of Inquiry, headed by retired judge Ian Farlam, was established two years ago by Zuma to investigate the deaths.

“The surviving victims of the tragic events of Marikana and the families of all those who died have a right to receive justice.”

The Marikana Support Campaign group demanded that the report should be published within two months, adding that the evidence heard by the inquiry pointed to some “some weighty conclusions”.

Mining house Lonmin was widely criticised during the inquiry for failing to engage with the workers’ wage demands.

It has also been blamed for the murders of its security guards and non-striking miners. The mining house has denied any responsibility.

A number of the legal teams recommended that senior police officials – including the former police minister Nathi Mthethwa and national police commissioner Riah Phiyega – be investigated for murder.

They also argued that Lonmin executives should be charged as accomplices. But others fingered South Africa’s Deputy President Cyril Ramaphosa.

Ramaphosa contacted the ministers of police and mineral resources in the days leading up to the massacre, pushing for police intervention over the strike.

Ramaphosa was not in government at the time, but a non-executive director of Lonmin and a senior leader in the ruling ANC party.

He has maintained he was simply trying to prevent further violence. 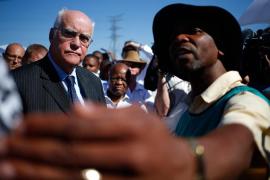 Commission struggles to find out the truth behind the deadly shootings at Lonmin’s Marikana mine. 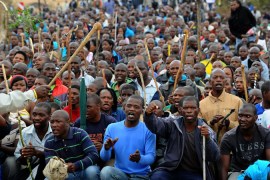 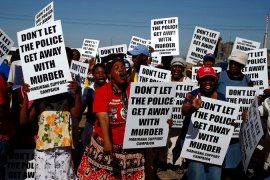 Officials say shooting of 34 miners by police ‘may have been disproportionate’ to the danger faced by officers.