Nigerian opposition contender Muhammadu Buhari, a former general who first won power three decades ago in a military coup, is closing in on a historic election victory, maintaining a hefty lead in the vote count for the presidency.

According to a Reuters tally collated from 33 of Nigeria’s 36 states, the 72-year-old had more than 14 million votes, testament to the faith Nigerians have put in him as a born-again democrat intent on cleaning up Nigeria’s corrupt politics.

Incumbent President Goodluck Jonathan, whose five years in office have been plagued by corruption scandals and an insurgency by Boko Haram fighters, has so far taken 11 million votes.

The vote sees an electorate divided along a complex mix of ethnic, regional and in some cases religious lines.

To win the election, a candidate needs to win more than 50 percent of the total votes nationally – and take at least 25 percent of the vote in two thirds of the states.

One of Jonathan’s big support bases, in the oil-producing Niger Delta, is yet to declare its results, but the gap is so large that most analysts said it was impossible to see the leader of the ruling People’s Democratic Party (PDP) closing it.

Despite glitches that saw some voting extended into a second day, and the killing of more than a dozen voters by Boko Haram fighters in the northeast, the election has been the smoothest since the end of military rule in 1999 – a factor that appears to have playedn a part in the outcome.

“There are probably lots of reasons why the PDP might have lost, but I think the key one is that the elections just haven’t been rigged,” said Antony Goldman, a business consultant with high-level contacts in Nigeria.

“If you leave it to the Nigerian people they will be ready to make big decisions and to make Nigeria look something more like a conventional democracy.” 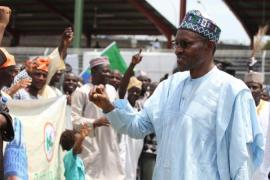 Nigeria 2015: Servicing the instruments of war

Ahead of the 2015 elections, Nigeria’s political elites are mired in exchanges of bitter criticism a 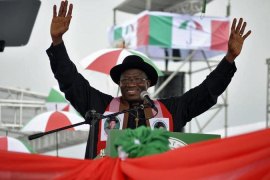 Incumbent president declares himself candidate for next year’s election, a day after school bombing killed scores.