A powerful earthquake has rattled the South Pacific nation of Papua New Guinea, generating a small tsunami and frightening locals near the epicentre, but prompting no reports of damage or injuries.

A tsunami of half a metre was measured on Monday in the harbour of Rabaul, a town near the epicentre of the 7.7-magnitude earthquake, said Martin Mose, acting director for Papua New Guinea’s National Disaster Centre.

Monday’s quake struck at a depth of 65km, about 50km southeast of the town of Kokopo, near Rabaul, in northeastern Papua New Guinea, the US Geological Survey reported.

The Pacific Tsunami Warning Centre had warned that tsunami waves of up to three metres could strike parts of Papua New Guinea, and waves of less than 0.3 metres could hit other Pacific countries, as far north as Russia. The centre lifted the warning a few hours later, after reporting a three-cm tsunami wave was measured at a wharf in the Solomon Islands, about 450km from the epicentre.

In Rabaul, residents noticed the sea level rose slightly, prompting ocean water to flood the parking lot of a shopping centre near the beach, said Mika Tuvi, an employee at the Rabaul Hotel. “But nothing beyond that – no damage caused,” she said.

When the quake struck, guests and workers at the hotel fled outside, fearing the building would collapse, Tuvi said. The tremors, which lasted for about five minutes, were frightening in their intensity, but the hotel withstood the shaking, she said.

Officials in Port Moresby, the capital, were working to contact their counterparts in the outer provinces, but hours after the quake, there still had been no reports of damage or injuries, said Mose, of the national disaster centre. He said he was confident the nation had averted a major catastrophe.

The quake caused strong shaking and knocked items off shelves in Kokopo, and was felt 800km away in Port Moresby, said Chris McKee, assistant director of the Geophysical Observatory in Port Moresby.

Earthquakes are common in Papua New Guinea. The country lies on the “Ring of Fire” – an arc of earthquake and volcanic activity that stretches around the Pacific Rim. 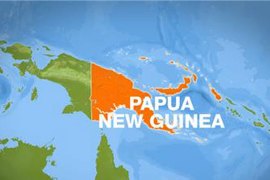 Powerful earthquake hits off northeastern coastal town of Rabaul, with a tsunami warning issued shortly after.