Appeals judges at the Yugoslav war crimes tribunal have ruled that Serbian far-right leader Vojislav Seselj breached conditions of his provisional release and must return to the UN court’s detainment centre in The Hague in the Netherlands.

The decree on Monday means authorities in Serbia will be ordered to detain Seselj, charged with war crimes during the Balkan Wars, and send him back to the International Criminal Tribunal for the former Yugoslavia (ICTY) where he had already spent more than a decade in custody.

Seselj, who is accused of recruiting paramilitary forces during the Balkan Wars, was released in November for medical treatment in Serbia on condition that he did not interfere with victims or witnesses and that he would return to the tribunal if summoned.

Serbian doctors say he is suffering from colon cancer that has spread to his liver.

Since his release, 60-year-old Seselj has repeatedly lashed out at the tribunal, vowing not to return for his sentencing or to serve any time, as well as resuming his poisonous nationalist rhetoric.

The prosecution had appealed against his provisional release, saying his public statements called into question the tribunal’s assessment of his health.

In addition, his “threats to persons who cooperated with the prosecution breached the condition of his provisional release not to obstruct the course of justice”.

Prosecutors said such statements breached the conditions of his release and in a majority written decision appeals judges agreed.

In an interview with Al Jazeera, Seselj also claimed that the Serbian government lobbied the ICTY for the ruling as a part of a crackdown against a rise in support for the Serbian Radical Party ahead of elections.

”Well, I don’t know if I will be returning at all, but I surely won’t be returning voluntarily [to The Hague]. This progressive regime [the Serbian Progressive Party] now needs to see what it will do. I will fight,” he said.

Asked how he would fight, Seselj said: ”I can do that only by political and legal means. I am old and ill, I can’t physically fight when [Serbian President] Tomislav Nikolic sends the army and the police. “Even the paratroopers are in a state of readiness.”

Seselj said the judges had ruled he must return to The Hague on the ”request of the government in Belgrade because the Serb Radical Party has already gained more than 20 percent [of voter support] and the elections are approaching.’.

Asked to comment on polls which indicate that his party is still below the electoral threshold, Seselj said: ”[Serbian Prime Minister] Aleksandar] Vucic personally ordered a professional poll about two months ago and according to those results, we had 17 per cent and according to the latest research we have 20 percent.”

Vucic denounced the tribunal’s decision as “immoral” and said the government will decide what to do “in the next few days”.

Rasim Ljajic, a Serbian government official in charge of cooperation with the UN court, said the decision to seek Seselj’s return is “strange and confusing, to say the least”.

“By reaching two contradictory decisions within only five months, the tribunal is making our mutual cooperation significantly difficult,” Ljajic said.

Seselj surrendered to the court in 2003 and is awaiting verdicts in his trial that was repeatedly delayed.

UN prosecutors have demanded a 28-year prison sentence for Seselj, saying his hate speeches at rallies “planted the seeds of ethnic hatred and helped them grow into ethnic violence against non-Serbs”.

Seselj was charged with war crimes, including planning the capture of towns in Croatia and Bosnia as part of a criminal plot involving other Serb leaders, such as former president Slobodan Milosevic, to drive out non- Serbs using massive destruction and terror.

Seselj and his political party were backing Milosevic, who was accused of committing genocide in connection to conflicts in Bosnia, Croatia and Kosovo. 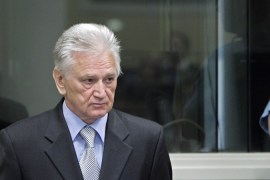 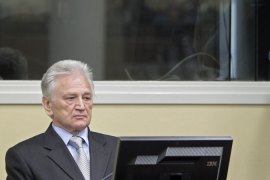 General Momcilo Perisic sentenced to 27 years in prison for war crimes in Bosnia and Croatia in the 1990s.