Iran and six world powers have continued negotiations to try and complete a deal to manage Tehran’s nuclear programme, two days ahead of the March 31 deadline.

Foreign Ministers from all of the so-called P5+1 countries – the five permanent members of the United Nations Security Council and Germany – arrived in the Swiss town of Lausanne over the weekend ahead of meetings with Iran’s foreign minister.

As discussions between some of the ministers continued on Sunday, UK Foreign Minister Philip Hammond said the deal has to be one “which puts the bomb beyond Iran’s reach”.

“There can’t be any compromise about that. So if we’re going to get this done in the next few hours, Iran needs to take a deep breath and make some tough decisions to ensure that those red lines can be met.”

Iranians have expressed guarded optimism that after 18 months of tortuous negotiations and two missed deadlines, a breakthrough may be at hand.

“Getting to an accord is doable. Solutions have been found for numerous questions. We are still working on two or three issues… The talks are in their final phase and are very difficult,” Iran’s chief negotiator Abbas Araqchi said.

According to German Foreign Minister Frank-Walter Steinmeier, there had been “some progress and some setbacks” during Sunday’s talks but he said that he did not rule out the possibility for “further crises in these negotiations”.

By Tuesday’s deadline, the foreign ministers intend to produce an outline of a final deal which will be negotiated by the end of June this year.

Al Jazeera’s James Bays, reporting from Lausanne, said that one of the sticking issues is any future research and development of Iran’s nuclear programme.

“The US seeks at least a 10-year suspension of sensitive nuclear work, however, some other countries within the world powers are negotiating a longer period – 11 to 15 years,” he said.

Bays said that Iran wanted sanctions to be fully lifted as soon as possible, while the world powers are seeking more insurance for the deal.

“They say they have to have something there to guarantee the implementation of the deal,” said Bays. “They want so-called snapback sanctions under the UN that can be revived in case of non-compliance.”

Iranian Foreign Minister Mohammad Javad Zarif said in a Facebook post late on Saturday that the talks had become more complicated with the arrival of more foreign ministers.

“We have made progress towards an acceptable solution, but several important questions still remain,” he said.

The sides have tentatively agreed that Iran would run no more than 6,000 centrifuges at its main enrichment site for at least 10 years, with slowly easing restrictions over the next five years on that programme and others Tehran could use to make a bomb.

US Secretary of State John Kerry cancelled plans to return to the US for an event honouring his late Senate colleague Edward Kennedy in order to remain at the ongoing nuclear talks in Switzerland.

The six world powers – US, UK, France, Russia, China and Germany – have been involved in the negotiations seeking to scale back Tehran’s nuclear programme in exchange for sanctions relief.

The West suspects Iran’s nuclear programme is intended for military purposes, but Tehran says it is meant for power generation. 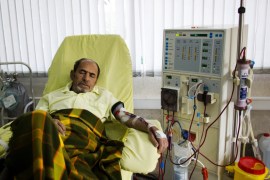 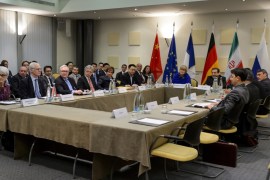 John Kerry and Mohammad Javad Zarif meet in Switzerland ahead of March 31 deadline to reach deal. 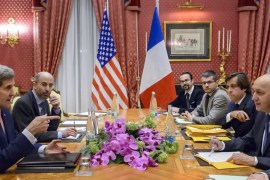 Seen as one of the most hawkish foreign ministers involved in talks, Laurent Fabius says he seeks a “robust agreement”.