Australia has responded to the Germanwings air disaster by mandating that at least two crew members be present at all times in cockpits of larger domestic and international airliners.

It would apply to all commercial flights with at least two flight attendants or more than 50 passengers. A flight attendant would enter the cockpit if one of the two pilots left it for any reason.

Previously, most Australian airlines have allowed their pilots to be alone on the flight deck.

French prosecutors blame co-pilot Andreas Lubitz, 27, for the crash of Flight 9525 that claimed 150 lives in southern France last week. The cockpit voice recorder has revealed that the pilot had been shut out of the cockpit when the Airbus A320 crashed.

Truss said there were already mental illnesses that stopped sufferers from being pilots in Australia, and that pilots’ health was regularly assessed.

“There is a need to balance the fact that people with proper treatment can recover from mental illness and be able to undertake normal careers with the critical priority of ensuring that aircraft are always safe,” Truss told reporters.

The German press has reported that searches conducted at Lubitz’s homes in Duesseldorf and in the town of Montabau revealed a torn-up doctor’s note that would have stopped him from flying on the day of the crash and that he had interrupted his pilot training in 2009 to receive psychiatric treatment for depression.

Investigators have yet to find conclusive evidence linking the crash to Lubitz’s mental health.

Pilot suicide is one of the theories behind the disappearance of Malaysia Airlines Flight 370, which flew far off course during a flight from Kuala Lumpur to Beijing on March 8 last year and is believed to have crashed off the Australian coast with 239 passengers and crew on board.

Truss said pilot suicide was suspected behind more than a dozen plane crashes over the past 40 years.

Flight 9525 had 144 passengers and six crew members on board and began the journey in Barcelona, heading for the German city of Dusseldorf. 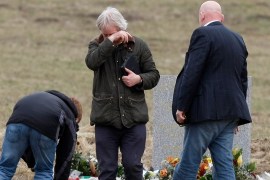 Father of one of 150 victims of plane crash in French Alps says pilot welfare must be taken into greater consideration. 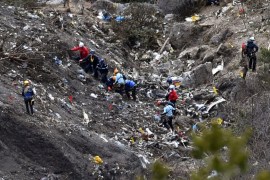 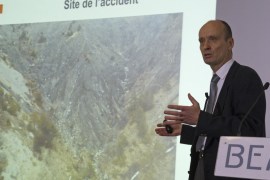 Pilot ‘locked out of cockpit’ in Germanwings crash

Sources close to probe say pilot can be heard in recordings trying to bash his way back into cockpit before Alps crash.