Syrian President Bashar al-Assad has said that Russia has been supplying weapons to Damascus under contracts signed since the conflict in the country began in 2011, as well as under earlier deals.

Assad’s comments, made in an interview published by Russian government newspaper Rossiyskaya Gazeta on Monday, appeared to contradict Moscow’s claim that any arms supplies to the Syrian government were agreed before the conflict began.

“They went through some changes to take into account the type of fighting the Syrian army carries out against the terrorists,” he said in the full text of the interviews, excerpts of which were published last week.

Assad gave no details of the weapons being supplied by Russia, the world’s second-biggest arms exporter, since the start of the conflict which has killed more than 220,000 people and displaced millions.

“In fact, Moscow has always highlighted that there have been and are no embargoes on military cooperation. There are no legal limitations on us,” he told reporters.

Russia and Iran have reportedly continued to provide much of the military support to the Syrian government, despite war crimes, crimes against humanity, and other atrocities allegedly committed in its bid to crush the country’s four-year uprising. 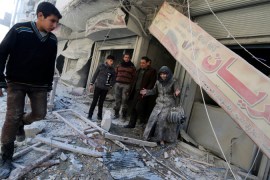 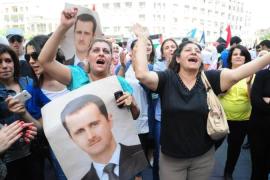 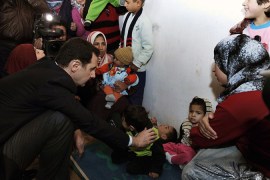 Syrian leader, most recently seen in mosque visit in January, makes rare public appearance in town outside the capital.