India and Pakistan have just suffered the effects of unseasonal wet and stormy weather. New Delhi’s streets were flooded, Kashmiri wheat was damaged and the city of Srinagar was coated in snow.

Rain flattened the wheat crop at the village of Ramgarh, near Patiala in Punjab. Further northwest, just outside Amritsar, vegetable fields were flooded. New Delhi typically receives 20mm of rain per month at this time of the year, usually in rogue thunderstorms. The first day of March brought 60mm.

On their own, none of these events would be headline news at another time of year, but in March this is not normal. The northeast monsoon has ended and the southwest monsoon has yet to start.

This unusual weather had its roots in Europe and the Middle East. A strong wind, carrying a bit of winter cold from Eastern Europe, came barreling down the Gulf at the end of February as a Shamal wind.

When this cool breeze emerged from the Straits of Hormuz, it flew over the warm surface of the Arabian Sea and rose upwards, spiralling like a summer thermal. This would normally come to nothing, but several things in the atmosphere above Pakistan conspired to produce a significant weather system.

This sort of development happens frequently over Japan or Britain, in the temperate climate zone, but over India and Pakistan it just doesn’t normally happen. Indeed rain hardly falls in February or March in India, except in Tamil Nadu, or the northwest. The average rainfall in Goa at this time of year is virtually zero.

This out-of-season, three-day weather system, dropped nearly 50mm of rain on parts of Maharashtra and Madhya Pradesh, and nearer 100mm in India’s northwest. In Pakistan, Karachi suffered a cold northeasterly wind of 45kph, as the low centre developed offshore on Thursday. 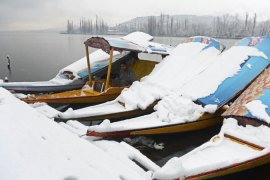 The Indian state of Jammu and Kashmir has experienced some disruptive March snow. 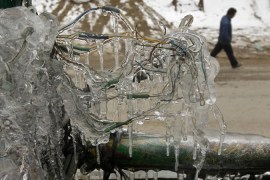