Syrian rebels, including al-Qaeda’s affiliate in Syria, have captured the northwestern city of Idlib for the first time from forces loyal to President Bashar al-Assad, activists and the rebels have said.

A major urban centre with a population of around 165,000, Idlib is located near the main highway linking the capital Damascus with Aleppo.

The Syrian Observatory for Human Rights, which monitors the conflict through a network of activists on the ground, said the rebels had taken control of all of the city after collapsing government forces withdrew.

“Al-Nusra Front and its allies have captured all of Idlib,” the Britain-based watchdog said, adding that at least 130 people were killed in the offensive.

“Thanks be to God, the city of Idlib has been liberated,” the Nusra Front wrote on one its Twitter account, the AFP news agency reported.

The Western-backed Syrian National Coalition opposition group said the wresting of Idlib from government control was an “important victory on the road to the full liberation of Syrian soil from the Assad regime and its allies.” However, it said more “decisive” assistance to Syrian rebels was needed for that to happen.

Meanwhile, Syrian state TV said government forces were repositioning their units in the south of the city.

The losses in Idlib mark the second blow to government forces this week, after the rebels captured the ancient and strategic town of Bosra al-Sham in the south.

More than 220,000 people have been killed in the conflict, which began with popular protests in March 2011 and ultimately turned into a civil war following a brutal military crackdown. 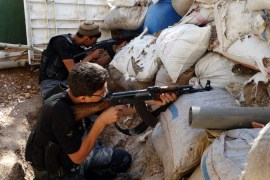 Rebel spokesman says armed groups push into city after fighting with troops left many casualties on both sides. 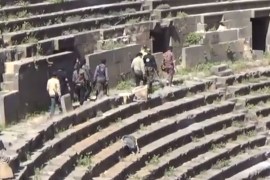 Syrian army and its allied fighters forced to withdraw from Bosra al-Sham after five days of fighting. 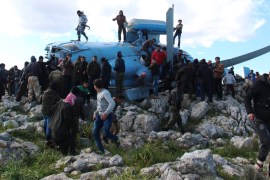 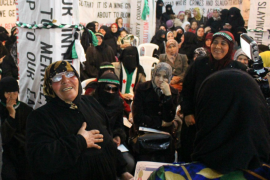 About 150 women take part in event honouring female leaders of the protest movement, as war rages across country.