A Saudi-led airstrike campaign targeting Shia rebels who control much of Yemen has pushed them out of contested air bases, the kingdom said, a day after Yemen’s president said the aerial attacks will not stop until the rebels surrender.

The campaign, now entering its fourth day on Sunday, continued to target Scud missiles in Yemen, leaving most of their launching pads “devastated,” according to remarks carried by the state-run Saudi Press Agency.

There was no immediate comment from the Houthis, who began their offensive in September, seizing the capital, Sanaa, and later holding embattled President Abd-Rabbo Mansour Hadi under house arrest.

Dozens of civilians have been killed in the Saudi-led coalition’s air assault, and ground fighting has been reported between Houthi fighters and armed men supporting Hadi in the southern port city of Aden.

Saudi Arabia announced its gains as Hadi, who has called the rebels “puppets of Iran”, warned the fighters that they would face more attacks unless they renounced their rebellion.

Speaking at the Arab League summit in Egypt on Saturday, Hadi said the rebels had “destroyed” Yemen.

“I say to the puppets of Iran, its toys and those who support it, you have destroyed Yemen with your political adolescence and by manufacturing domestic and regional crises,” Hadi said.

Iran and the Houthis deny that Tehran arms the rebel movement, though the Islamic Republic has provided humanitarian and other aid.

Officials in Iran had no immediate comment on Hadi’s remarks.

The UN has been forced to evacuate its staff from Yemen, as Saudi-led coalition led and member states of the Gulf Cooperation Council continued to bomb Houthi positions.

Saudi Arabia has said Bahrain, Kuwait, Qatar and the United Arab Emirates – all members of the GCC – are part of the coalition, but it is not clear whether their fighter jets are also pounding Houthi positions. No mention has been made of Oman, which is also a member of the GCC.

At the summit in the Red Sea resort of Sharm el-Sheikh, Egypt’s president Abdel Fattah el-Sisi supported the creation of a regional Arab military force and a Gulf diplomat warned that Saudi-led air strikes in Yemen could go on for months.

Leaders of Egypt, Saudi Arabia and Kuwait blamed Iran for meddling in the affairs of Arab nations, with Sisi saying, without mentioning Iran by name, that it was “spreading its ailment in the body”.

“This nation, in its darkest hour, had never faced a challenge to its existence and a threat to its identity like the one it’s facing now,” Sisi said.

Hadi directly challenged Iran in his remarks and called for his supporters to rise up in peaceful protest against the Houthis.

Meanwhile, a news report on the Houthi-affiliated Al-Masirah television station referred to Hadi as a “puppet” of Saudi Arabia, where the president fled shortly after the air strikes began. He flew to Egypt for the summit from Riyadh, the Saudi capital.

Ali al-Emad, a senior official of the Houthi movement’s political arm, Ansar Allah, told the station that nothing said at the summit came as a surprise.

“We knew from day one that we are facing regimes that are allies, agents or toys of foreign powers,” he said. “Yemen will prove to the world that the weak will triumph at the end.” 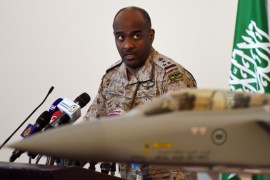 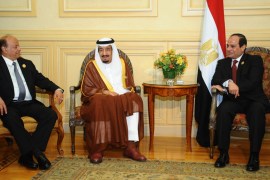 Yemen’s president calls on rebels to surrender their arms and for their leaders to turn themselves in at Egypt meeting.